Video: Our Lady of Fatima can save Church

De Mattei: Our Lady of Fatima can save Church – Full Talk Video

END_OF_DOCUMENT_TOKEN_TO_BE_REPLACED 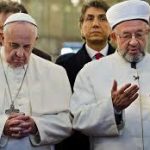 The bloodshed in Tanta and Alessandria is a brusque wake-up call for Pope Francis on the eve of his trip to Egypt. The attacks in the Middle East, as in Europe, are not natural disasters, preventable through ecumenical meetings, like the one that Pope Francis will have on April 28th with the Grand Imam di Azhar, but  episodes which remind us of the existence in the world of deep ideological and religious divisions that can only be healed by returning to the truth. END_OF_DOCUMENT_TOKEN_TO_BE_REPLACED