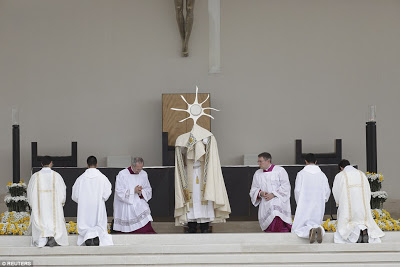 Five hundred people were in the square outside the Sanctuary at Fatima waiting for Pope Francis and the canonization of the two little shepherd Francesco (10) and Jacinta (9), who, along with their cousin Lucia dos Santos saw Our Lady and heard Her words between May 13th and October 13th 1917. The canonization took place and the Church has the youngest children not martyrs in Her history, written in the book of saints. The process for the beatification of their cousin Lucia who died in 2005, is also underway.

What Fatima devotees from all around the world expected from the Pope was not only the canonization of the visionaries, but also the fulfillment  of some of Our Lady’s requests, until now gone unheeded.

Two antithetical centenaries are in fact, being celebrated this year: the Fatima apparitions and Lenin and Trotsky’s Bolshevik Revolution in Russia, occurring in the same month the Marian events were coming to an end in Portugal. At Fatima Our Lady announced that Russia would have scattered its errors all over the world and from these errors there would have been wars, revolutions and persecutions against the Church. In order to avoid these disasters Our Lady asked especially for a sincere repentance from mankind and a return to the moral order of Christian principles.  To this necessary amendment of Christians, Our Lady added two specific requests: the Consecration of Russia to the Immaculate Heart of Mary, to be performed by the Pope in union with the bishops throughout the world, and the propagation of the practice of the first five Saturdays of the month, consisting of uniting ourselves with Her, confession and reception of Communion, for five consecutive months, meditating for fifteen minutes and praying the Rosary.

The spreading of the practice of the First five Saturdays has never been promoted by the ecclesiastical authorities, the acts of entrustment and consecration by Pontiffs have all been partial and incomplete, but most of all, for at least fifty years, Churchmen have not been preaching the spirit of sacrifice and penance anymore, so closely linked to the two little canonized shepherds. In 1919 when Lucy visited Jacinta in hospital on the eve of her death, their conversation was entirely centered  on the sufferings of the two cousins, offered for sinners to avoid the terrible punishments of Hell, which had been shown to them by Our Lady.

Pope Francis, who had never been to Fatima before, not even as a simple priest, did not touch on any of these themes. On May 12th, in the Chapel of the Apparitions, and presenting himself as a “bishop dressed in white”, the Pope said “As a pilgrim of the Hope that the Spirit awakens, I come as a prophet and messenger to wash the feet of all, at the same table that unites us.”Then, the invitation to follow the examples of Francesco and Jacinta.“Thus we will follow all paths and everywhere make our pilgrim way; we will tear down all walls and cross every frontier, as we go out to every periphery, to make known God’s justice and peace.”In his homily on May 13th in the sanctuary’s courtyard, Francis remembered “all my brothers and sisters in baptism and in our human family” especially “the sick and the disabled, prisoners and the unemployed, the poor and the abandoned,” with the invitation to” rediscover the young and beautiful face of the Church, which shines forth when she is missionary, welcoming, free, faithful, poor in means and rich in love.”

The tragic dimension of the Fatima message, which rotates around the concepts of sin and punishment, has been put aside. Our Lady had said to little Jacinta that wars are nothing other than  punishment for the sins of the world and that the sins which carry most souls to hell are the ones against purity. If today we are experiencing “a [world]war in pieces” , as Pope Francis has often repeated, how can we not connect this to the horrifying explosion of present-day immorality, which has gone as far as legalizing the inversion of the moral laws?  Our Lady once again had said to Jacinta, that if there had not been any amendment and penance, humanity would have been punished, but in the end Her Immaculate Heart would triumph and the entire world would be converted.

Today, not only is the word “punishment” abhorred, seeing that the mercy of God cancels every sin, but the very idea of conversion is unpleasant, as proselytism, in Pope Francis’ view, “is the strongest poison against the ecumenical path”.

We need to acknowledge that the message of Fatima reinterpreted according to Pope Francis’ sociological categories has little to do with the prophetic announcement of the Immaculate Heart of Mary, which Our Lady proclaimed to the world one hundred years ago.

Tweet
This entry was posted in Articles, Italiano and tagged Fatima. Bookmark the permalink.