Russia will be Catholic (II) 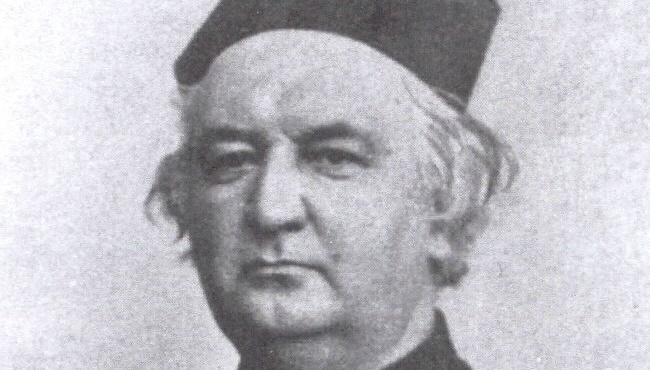 “Russia will be Catholic”. The dream of many converted Russians of the 19th century, like Father Šuvalov, is also the title of a book which caused a sensation in its time: La Russie sera-t-elle catholique? (Parigi 1856) by Father Ivan Gagarin, member of the Company of Jesus.

Ivan Sergeevič Gagarin was born in Moscow on July 20th 1814, of an illustrious princely lineage, descendants of the Princes of Kiev, He was an officer with the Russian Legation in Munich and then with the Embassy in Paris, where he became part of the French intelligentsia, frequenting the “salons” of Sophie Swetchine. Under her influence and that of authors like Pëtr Jakovlevič Čaadaev (1794-1856), his conversion to Catholicism matured. On April 7th 1842 he abjured the Orthodox religion and embraced the Catholic faith, under the care of Father Francesco Saverio de Ravignan (1795-1858), who had already received Count Šuvalov’s conversion. Ivan Gagarin, at the age of 28, renounced not only a brilliant political and diplomatic career, but also any hope of returning to his own country.

In Czarist Russia, in fact, conversion to Catholicism was a crime comparable to desertion or parricide. The renunciation of Orthodoxy for another religion, even if Christian, was punished by the loss of material goods, civil rights, noble titles and foresaw reclusion in a monastery or exile in Siberia.

A year later, Ivan, now Jean Xavier Gagarin, requested admission to the Company of Jesus and was accepted into the novitiate of St. Acheul. [Thus] he began a long period of study which concluded with his ordination to the priesthood and profession of religious vows in the Order of St. Ignatius of Loyola. For Father Gagarin, in whom burning zeal, a keen intelligence and an aristocratic upbringing were united, a new life began.

During the Crimean War, he collaborated with the famous mathematician Augustin Cauchy (1789-1857) in the foundation of the work École d’Orient. Towards the end of 1856 he founded the quarterly review Études de théologie, de philosophie et d’histoire which eventually became the celebrated Études. However, in 1862, when the publication was taken over by the French Jesuits, it underwent a radical transformation. While the First Vatican Council was opening, Études, unlike its Roman sister La Civiltà Cattolica, took on a pro-liberal position, which it would maintain throughout the following century.

The Russian government, which intended to extirpate Catholicism from the western provinces of the Empire, deemed Prince Gagarin an enemy to be rid of. He was accused of writing anonymous letters to the poet Aleksandr Sergeevič Puškin (1799-1837), whom he had exasperated, forcing him into a duel in which he died. Recently a young Polish historian Wiktoria Sliwowska showed that it was all a smear campaign organized by The Third Section of His Majesty’s Own Chancellery (L’Affaire Gagarine, Institutum Historicum Societatis Iesu, Roma 2014, pp. 31-72).

La Russie sera-t-elle catholique? appeared in 1856. In this work, Father Gagarin referred to the solemn Bull Allatae sunt issued by Benedict XIV on July 26th 1755, with which the Holy Father manifested “the good will which the Apostolic See feels for Oriental Catholics in commanding them to observe fully their ancient rites which are not at variance with the Catholic religion or with propriety. The Church does not require schismatics to abandon their rites when they return to Catholic unity, but only that they forswear and detest heresy. Its great desire is for the preservation, not the destruction, of different peoples-in short, that all may be Catholic rather than all become Latin.”

In order to lead the Slavic people back to unity – Father Gagarin comments – we need to respect the oriental rites, to ask for their foreswearing of errors contrary to the Catholic Faith, but above all, to combat the political-religious conception of the Orthodox. For the Russian Jesuit, the Orthodox schism is above all the result of the “Byzantine” a concept with which he means the difference of the relationships between Church and State that exist in the Byzantine and Western world. For Byzantium there is no distinction between the two powers. The Church is made de facto subordinate to the Emperor, who is thought to be the head of it, inasmuch as he is God’s delegate in both the ecclesiastical and the secular spheres. The Russian autocrats, like the Byzantine emperors, see in the Church and religion a means to use in order to guarantee and increase political power.

This wretched system is established upon three pillars: the Orthodox religion, autocracy and the principal of nationality, under which the ideas of Hegel and the German philosophers penetrated Russia. That which is hidden behind the pompous words of Orthodoxy, autocracy and nationality “ Is nothing other than the oriental form of the 19th century revolutionary idea.”(p.74).

Gagarin sensed the ferocity with which the revolutionary ideas would be applied to his country. In his eyes, the pages of Proudhon and Mazzini appeared to be benevolent and courteous in comparison to the violence of the Russian agitators. “It is a contrast that can serve to measure the difference between how the revolutionary principle is understood in Europe and how it would be put into practice Russia.” (pp. 70-71).

In a prophetic page, Father Gagarin writes: “the deeper you go into things, the more you are brought to the conclusion that the only real fight is that which exists between Catholicism and the Revolution. In 1848, when the revolutionary volcano was terrorizing the world with its howling and made society tremble, extirpating its foundations, the party which was dedicated to defend the social order and to combat the Revolution did not hesitate in writing on its flag: Religion, Property, Family, and did not hesitate in sending an army to bring back to his throne the Vicar of Christ, who had been forced into exile by the Revolution. He was perfectly right; there are only two principles against each other: the revolutionary principle, which is essentially anti-Catholic and the Catholic principle, which is essentially anti-revolutionary.

Despite contrary appearances, there are but two parties and two flags only. On the one side the Catholic Church raises the Banner of the Cross, which leads to true progress, true civilization, true freedom; on the other, the Revolutionary banner is raised, around which the coalition of all the Church’s enemies is gathered. Now what is Russia doing? On the one side, She is combating the Revolution, on the other She is combating the Catholic Church. Both externally and internally, you will find the same contradiction. I do not hesitate to say that what gives Her honor and strength, is being the unwavering adversary of the revolutionary principle. What makes for her weakness, is being, at the same time, the adversary of Catholicism. And if She wants to be coherent , if she truly wants to combat the revolution, She has only one choice: make a decision, to stand behind the Catholic Banner and reconcile with the Holy See.” (La Russie sera-t-elle catholique?, Charles Douniol, Paris 1856, pp. 63-65).

Russia rejected the appeal and the Bolshevik Revolution, after exterminating the Romanovs, spread its errors throughout the world. The abortionist and homosexual mentality, which today is leading the West towards death and which has its roots in the Marxist-Hegelian philosophy, was established in Russia in 1917. The defeat of the revolutionary errors cannot be brought to an end, in Russia and in the world, except under the Banner of the Catholic Church.

Padre Gagarin’s ideas impressed the German Baron August von Haxthausen (1792-1866), who, with the support of the Bishops of Münster and Paderborn established a League of Prayer, called Petrusverein: the Union of St. Peter for the conversion of Russia. A similar association under the impetus of the Barnabite Fathers Šuvalov and Tondini came into being in Italy and France. To the members of these associations, prayer for the conversion of Russia was recommended on all the first Saturdays of the month. On April 30th 1872, Pius IX with his Brief, granted a plenary indulgence to all those who, confessed and received Communion, by attending Mass on the First Saturday of the month, offered for the return of the Greek-Russian Church to Catholic unity.

Our Lady most certainly is pleased with this devotion, as at Fatima, in 1917, She recommended the reparatory practice of the First Five Saturdays of the month as an instrument of establishing Her Reign in Russia and the entire world.