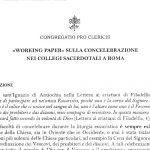 There is this rumour going around in the Vatican. One of Pope Francis’ collaborators asked him if it were true that a commission had been set up “to re-interpret” Humanae Vitae and he responded “It is not a commission, it’s a study group”. This is not only a linguistic ploy to hide the truth, but a play on words which reveal how the cult of contradiction is the essence of this pontificate. Monsignor Gilfredo Marengo, coordinator of the “study group”, sums up this philosophy well when he says we need to avoid the “polemical game – the pill – yes – the pill – no, just like today’s – Communion to the divorced – yes – Communion to the divorced – no” (Vatican Insider, March 23rd 2017). END_OF_DOCUMENT_TOKEN_TO_BE_REPLACED