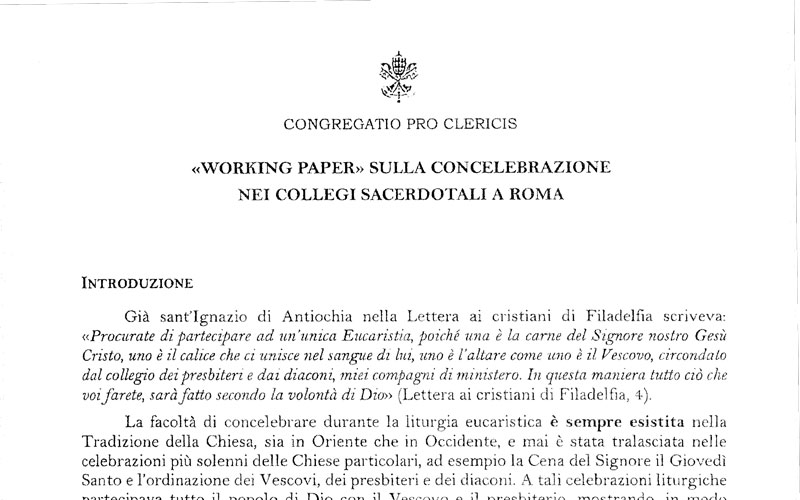 There is this rumour going around in the Vatican. One of Pope Francis’ collaborators asked him if it were true that a commission had been set up “to re-interpret” Humanae Vitae and he responded “It is not a commission, it’s a study group”. This is not only a linguistic ploy to hide the truth, but a play on words which reveal how the cult of contradiction is the essence of this pontificate. Monsignor Gilfredo Marengo, coordinator of the “study group”, sums up this philosophy well when he says we need to avoid the “polemical game – the pill – yes – the pill – no, just like today’s – Communion to the divorced – yes – Communion to the divorced – no” (Vatican Insider, March 23rd 2017).

We need this premise to present a new confidential document, it also, the product of another “study group”. It is the “working paper” of the Congregation for the Clergy “On Concelebration in the Colleges and Seminaries of Rome”, which is circulating in an unofficial way in the Roman colleges and seminaries.  What emerges clearly from this text is that Pope Francis wants to impose Eucharistic Concelebration in the colleges and seminaries of Rome, de facto, if not in principle, affirming that: “the celebration in community must always be preferred to individual celebration”.

The motive for this decision emerges from the document. Rome is not only the See of the Chair of Peter and the heart of Christendom, but it is also the place where priests and seminarians from all over the world meet to acquire that veneration towards the faith, the rites and  traditions of the Church, which was once called “the Roman spirit”.  The sojourn in Rome, which helped to develop love for the Tradition of the Church, today offers the opportunity for a liturgical and doctrinal “re-education”, to those who want to “reform” the Church according to the directives of Pope Bergoglio. Life in the Roman colleges – affirms the “working paper” in fact: offers the occasion “of experiencing, at the same time, an intense period of permanent, integral formation”.

The document refers explicitly to a recent speech given to priests studying in Rome, wherein Pope Francis expressed the ecclesial importance of concelebration in the context of the communities of priest-students: “ It is a unending challenge to overcome individualism and experience diversity as a gift, seeking the unity of the presbyter, which is a sign of God’s presence in community life.  The presbyter who doesn’t maintain unity, de facto, drives God away from the life of the community. He doesn’t give witness to the presence of God. He drives Him out. Thus, gathered in the Name of the Lord, especially when the Eucharist is celebrated, you manifest also sacramentally that He is the love of your heart.” (Discourse, April 1st 2017).

In the light of this doctrine, the “working paper” by the Congregation for the Clergy, repeats that “ the concelebrated Mass is preferable to individual celebration” (the bold is in the original and also in the following citations).

“Therefore, Superiors are heartily recommended to encourage Concelebration, even several times a day, in the large priestly communities. Hence, several concelebrations can be anticipated in the various Colleges, so that the resident priests can participate according to their personal needs, carefully establishing [Masses] two or three times a day.”

“In effect, everyday relations, shared on a daily basis for years in the same Roman College are an important experience in every priest’s vocational trajectory.  By way of this mediation, in fact, fraternal bonds and communion are established among priests of different dioceses and nations which find a sacramental expression in Eucharistic concelebration.”

“Certainly, leaving one’s own diocese and pastoral mission for quite a long time guarantees not only intellectual preparation, but above all, offers the opportunity, at the same time, to experience an intense period of enduring, integral formation.  With this in mind, the community life in the priestly Colleges offers this modality of presbyterial fraternity, probably new in respect to that of the past.

“The College experience is an opportunity for fruitful celebration of the Eucharist on the part of the priests. Thus, the practice of daily  Eucharistic Concelebration in Colleges can become an occasion for deepening the spiritual life of priests, with important fruits such as: the expression of communion among priests from different particular Churches, which is manifest especially when Bishops of different dioceses preside over the concelebration on their visits to Rome; the chance to listen to the homilies of other confreres; the carefully prepared celebration, even solemn, of the daily Eucharist, the deepening of Eucharistic devotion which every priest needs to cultivate, outside the celebration itself.”

Among the practical norms indicated, we can read:

“It is to be recommended that priests can participate ordinarily in the Eucharistic Concelebration in the hours established by the College, always preferring community celebration to the individual one. In this sense, the Colleges with a large group of priests could establish the Eucharistic Concelebration in 2 or 3 different hours of the day, so that everyone may be allowed to participate according to their personal, academic or pastoral needs.”

“If the resident priests in the College for particular circumstances cannot participate in the Concelebration during the hours established, they must always prefer to celebrate together in another more convenient hour.”

The violation of Canon 902, according to which priests “may concelebrate the Eucharist; they are however, fully entitled to celebrate the Eucharist individually”, is obvious and repeated in two passages of the text, with the result that the colleges that apply the “working paper to the letter”, will violate the current universal law. But beyond the juridical considerations, there are others of a theological and spiritual nature.

On March 5th 2012, on occasion of the presentation of Monsignor Guillaume Derville’s book, Eucharistic Concelebration. From Symbol to Reality. (Wilson & Lafleur, Montréal 2012), Cardinal Antonio Cañizares, the then Prefect of the Congregation for Divine Worship, underlined the need for “moderating” concelebration, making the words of Benedict XVI his own: “I join […] in recommending the daily celebration of Mass, even when the faithful are not present. This recommendation is consistent with the objectively infinite value of every celebration of the Eucharist, and is motivated by the Mass’s unique spiritual fruitfulness. If celebrated in a faith-filled and attentive way, Mass is formative in the deepest sense of the word, since it fosters the priest’s configuration to Christ and strengthens him in his vocation.” (Apostolic Exhortation, Sacramentum caritatis, n. 80).

Catholic Doctrine in fact, sees in Holy Mass the unbloody reenactment of the Sacrifice of the Cross. The multiplication of Masses renders greater glory to God and is an immense good for souls. “if every Mass has in itself the same infinite value – writes Father Joseph de Sainte Marie – the dispositions of men to receive its fruits are always imperfect and, in this sense, limited. From here [comes] the importance of the number of celebrations of Masses in order to multiply the fruits of salvation. Sustained by this elementary but sufficient theological reasoning, the  redeeming fecundity of the multiplication of Masses is moreover proved by the liturgical practice of the Church and of the stance of the Magisterium.  Of this fecundity, the Church – history teaches – has become progressively more aware over the course of the centuries, has promoted the practice of the multiplication of Masses and subsequently has encouraged it officially more and more.” (L’Eucharistie, salut du monde, Dominique Martin Morin, Paris 1982, pp. 457-458)).

For the neo-modernists, the Mass is reduced to an assembly: the more priests and faithful present, the more significant it is.  Concelebration is intended as a means for the Priest to lose slowly the awareness of who he is and what his mission is, which is exclusively the celebration of the Eucharistic Sacrifice and the salvation of souls. The diminution of Masses, however — as well as the right conception of the Mass —  is one of the main causes for today’s religious crisis.

Now even the Congregation for the Clergy, at the request of Pope Francis, is making its contribution to the demolition of the Catholic Faith.