The Müller Case: “The lesson of history is that those who do not fight know “ 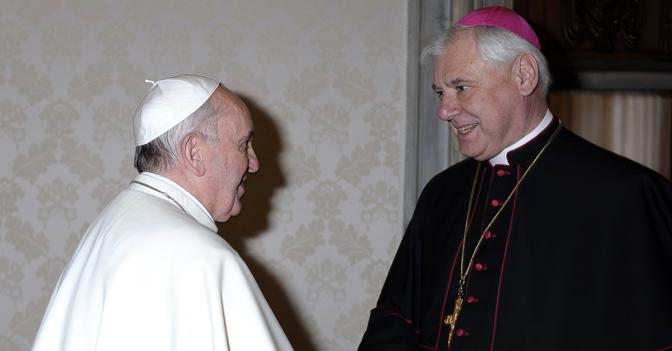 The removal of Cardinal Ludwig Müller signifies a critical moment in the history of Pope Francis’ pontificate. In fact, Müller, named Prefect of the Congregation for the Faith on July 2nd 2012 by Benedict XVI, is only 69 years old. It has never happened that a cardinal with more than 5 years to the canonical age of retirement (75) has not had his position renewed for a further five years.

Suffice to say that there are prelates, who, even if they are ten years older than Cardinal Muller, occupy important offices. For example, Cardinal Francesco Coccopalmerio, President of the Pontifical Council for Legislative Texts, the same cardinal whose secretary was caught in the act, by the Papal Gendarmerie, during a drug-based homosexual orgy in an apartment building, belonging to the Vatican. Coccopalmerio though, had shown his appreciation for Amoris Laetitia, explaining that: “the Church has always been however the refuge of sinners”, whereas Müller did not hide his perplexity towards the ‘apertures’ in the papal Exhortation, even if with declarations of an oscillating nature.

In this respect, the dismissal of Cardinal Müller, is an act of authority which constitutes an open challenge by Pope Bergoglio to the sector of conservative cardinals, to whom the Prefect of the Congregation for the Faith was well-known to be close to. Francis moved forcefully, but also skillfully. He began isolating Müller, by forcing him to dismiss three of his most trusted collaborators.

Then Pope Bergoglio left the possibility of his renewal dangling until the very last minute, without ever giving him any explicit assurances. In the end he replaced him, but not with an exponent of radical progressivism, like the Rector of the Università Cattolica of Buenos Aires, Monsignor Víctor Manuel Fernández, or the special Secretary to the Synod, Monsignor Bruno Forte. The one chosen is Archbishop Luis Francisco Ladaria Ferrer, a Jesuit, until now the Secretary of the Congregation. His choice both reassures and floors conservatives. What some of them don’t understand is that for Pope Francis, what is important is not the ideology of his collaborators, but the allegiance to his plan of “irreversible reform” for the Church.

More than a victory for Pope Francis, we should say, however it’s a defeat for the conservatives. Cardinal Muller does not share Pope Francis’ line, and had attempted to assume publically a contrary position, but the current thesis in the group of conservatives, was that it would have been better that he keep his position being silent, rather than losing it by speaking.

The Prefect chose to have “a low profile”. In an interview to Il Timone, he said that “Amoris laetitia, should be clearly interpreted in the light of the entire doctrine of the Church. […] I don’t like it – it is not correct that many bishops are interpreting “Amoris laetitia” according to their own way of understanding the Pope’s teaching.” But in another declaration, he had also expressed his opposition to the “publication” of the “dubia” of the four Cardinals. Which didn’t prevent his removal.

The “low profile”, in the strategy of some conservatives, is a lesser evil with respect to the greater evil of losing an office captured by adversaries. This strategy of “containment” does not work however with Pope Francis. What in effect, was the outcome of the sequence of events? Cardinal Muller missed out on a precious opportunity to criticize Amoris laetitia publically, and in the end was dismissed, without even due notice.

It’s true, as Marco Tosatti observes, that he is freer now to say what he wants. Yet, even if he did so, it would be the voice of a retired Cardinal and not that of the Prefect of the most important Ministry of the Church. The support of the Congregation of the Faith for the four Cardinals, who continue on their path, would have been ruinous for those who today are leading the Revolution in the Church and Pope Francis has been able to avoid that. The moral of this story is that those who do not fight in order not to lose, after conceding, they experience defeat.