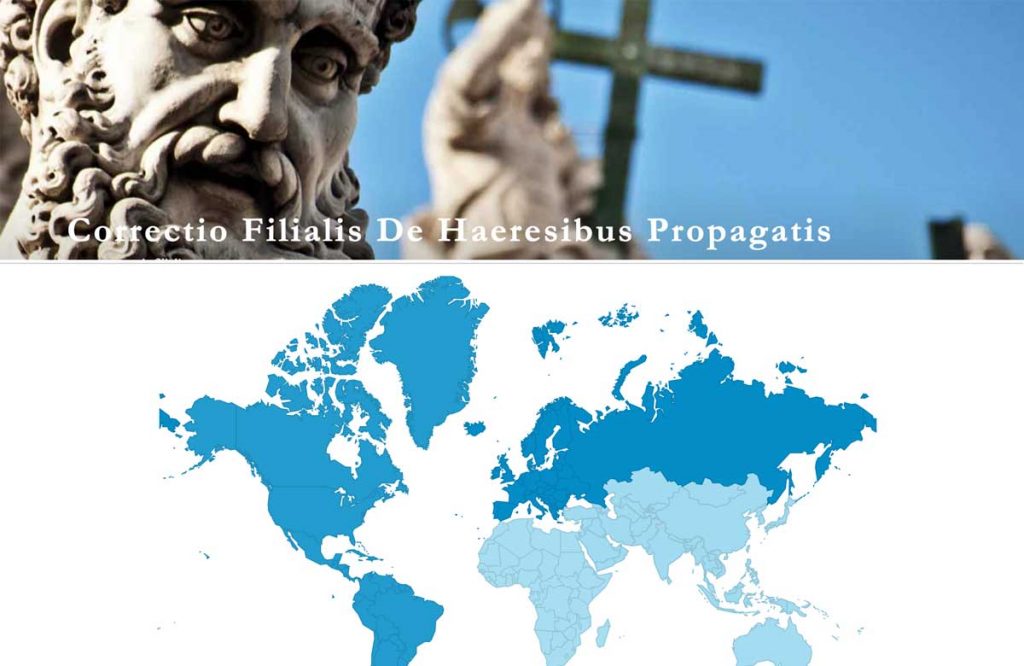 On September 25th, the day after the publication of the Correctio filialis to Pope Francis, Greg Burke, the spokesman for the Vatican Pressroom, with condescending irony, denied the news diffused by Ansa, which had reported that access to the site of the Correctio had been blocked by the Holy See: “Do you really think we would do this for a letter with 60 names?” The director of the Pressroom, who judges initiatives on the basis of the number of “followers” , might be interested to know that www.correctiofilialis.org, eight days after being put online, had more than 180 thousand individual visitors and 330 thousand page visits.

The visits come from 200 different countries of the five continents. Italy and the United States lead the number of accesses. Further, the letter of correction addressed to Pope Francis by 62 scholars, was shared on October 3rd, by 216 theologians, priests, professors and scholars of all nationalities, whose signatures are visible on the site. Added to these, there are thousands of adherents, who put their signature on the official site or on other Catholic sites which actively support the initiative: onepeterfive.com, lifesitenews.com, katholisches.Info. Guido Mocellin, in Avvenire of September 27th, had to admit that in “the ecclesial blogsphere” , thanks to a” modern website in six languages”, “the posts on the Correctio filiale directed to Pope Francis “as a result of the propagation of heresies” have been the most present over the past few days: they constituted 30% of all those that I was able to consult between Saturday 24th and Monday 26th of September.

If we want to stay with the numbers, the number of cardinals, bishops and theologians who have risen up against the Correctio, in defence of Amoris laetitia, is irrelevant. Even the Cardinal closest to Pope Francis, the Secretary of State, Pietro Parolin, took a position of equidistance, declaring that “people who are not in agreement voice their dissent but these things have to be discussed, in an attempt to understand”.

What is missing most of all, beyond the number, is substance in the argumentation of the efforts to reply to the Correctio. The greatest effort done, which nearly arrives at the acrobatics of the sophists, we owe to the Member of Parliament and philosopher Rocco Buttiglione on Vaticaninsider of October 3rd. The central passage of Amoris laetitia criticized by the signatories of the Correctio, according to Buttiglione, is “something absolutely traditional, which we all studied as children at Catechism in the Catholic Church, not only in the new one by St John Paul II, but also in the old one by Pius X”. It’s true – Buttiglione admits that there is “an absolute impossibility of giving Communion to those in a state of mortal sin (and this rule is of the Divine law and thus unbreakable) but if, as a result of lack of instruction or deliberate consent, there is no mortal sin and Communion may be given, from the point of view of moral theology, even to a divorced and remarried [person].”

For Buttiglione, like Pope Bergoglio’s trusted theologian, Monsignor Victor Manuel Fernàndez, the basic problem would be that of the “imputability ” of the acts. An imputabilty which would be absent in the great majority of more uxorio cohabitants, since the concrete situations they are living in, mitigate there awareness and, above all, for them, render it practically impossible to observe the law of the Lord. With this the Council of Trent is, without any qualms, contradicted; [the very Council] which anathematizes those who say “that the commandments of God are even for a man who is justified and confirmed in grace impossible” [Denz-H. n.1568). “God, in fact, does not command the impossible; but when He commands He admonishes us to do what is possible, ask what is not possible and He helps you to make it possible.” (Denz-H, n. 1356).

On the other hand, the bishops who apply Pope Francis’ teaching, are not inspired by Pius X’s catechism, nor John Paul II’s new one. In their dioceses, the divorced-remarried, perfectly aware of their situation, insist on Communion and according to Amoris laetitia, Communion is permitted to them, as a legitimate right.

To justify this immoral practice, we have arrived at the falsification of St Thomas Aquinas’ thought. However, a valiant Italian moralist who signed the Correctio, Don Alfredo Morselli, demonstrated, on Messainlatino blogspot, October 3rd, the impossibility of harmonizing Pope Francis’ Exhortation with the doctrine of St. Thomas. Don Morselli refers to some unequivocal passages by the Angelic Doctor, which affirm the contrary of § 301 in Amoris laetitia: “A good intention is not sufficient to determine the goodness of an act: since an act can be in itself bad, and in no way can it become good” (Super Sent., lib. 2 d. 40 q. 1 a. 2 co.). “There are some, (human actions) that have a a deformity inseparably belonging to them, like fornication, adultery and other things of this kind, which cannot be considered morally good in any way whatsoever.” (Quodlibet IX, q. 7 a. 2 co.).

In coherence with authentic Thomism, Monsignor Fernando Ocáriz, presently an Opus Dei prelate, at a convention promoted to celebrate the 20 years of Humanae Vitae, recalled that “the existence of particular norms of natural morals, having universal and unconditional value belong to Catholic doctrine, and actually is a truth of the faith” (Humanae Vitae, 20 years later, Edizioni Ares, Milan 1989, p. 129). Among these, the prohibition of contraception and the prohibition of adultery. Has the teaching of the University of Santa Croce and Navarra (promoter of that convention along with the John Paul Institute) changed or will it change? One wonders, after the interview of September 30th at Infovaticana.com, in which the present Vicar of Opus Dei, Mariano Fazio, censures other members of the prelature who signed the Correctio, accusing them of “scandalizing the entire Church”.

The interview is strange: neither the Argentine Bishops nor the Maltese Bishops, who authorize adultery in their dioceses are guilty of scandalizing the Church, but those who protest against these scandals are. The Pope, according to Fazio, can be criticized, but in private circles, never publically. In the avalanche of contrary comments, which submerged the blog Infovaticana, there is one which hits the nail on the head: “What about St. Paul?” Wasn’t it precisely St. Paul who corrected St. Peter publically? (Gal. 2, 7-14) The apostolic candour of St. Paul and the humility of the Prince of the Apostles have remained, since then, the model of the correct relationship between those who exercise authority and those who obey them with filial respect but not without discernment.

One of the most influential signatories of the Correctio, the theologian and philosopher of Science, Don Alberto Strumia, prefers discernment. In an interview on September 30th to the daily, Il Giornale, he explained: “The doctrine of the Church was not invented by theologians and not even by Popes, but is founded in the Scriptures and rooted in the tradition of the Church. The Pope is at its service, as guardian and guarantor of this continuity and cannot break it not even covertly, implying, with ambiguous formulations, that today one might think of doing the opposite of what has been taught until now by the Magisterium, regarding essential questions such as the doctrine of the Sacraments and family morality, with the motivation that times have changed and the world demands some adjustment. For this [reason] it is a duty of charity, which has the aim of “saving souls” as it was said in the past, the defense of the very dignity of the throne of Peter, and of the one who sits there, to highlight these ambiguities with the greatest respect.” […] “ To dare address a doctrinal correction to the Pope can be done and must be done only when the truth of the Faith is in danger and thus the salvation of the members of the people of God.”

At a time when consciences are darkened, the Correctio filialis expresses the sensus fidei of tens of thousands of Catholics who remind their Supreme Pontiff with filial respect, that the salvation of souls is the greatest good and for no reason in the world can one do evil or make compromises with it.