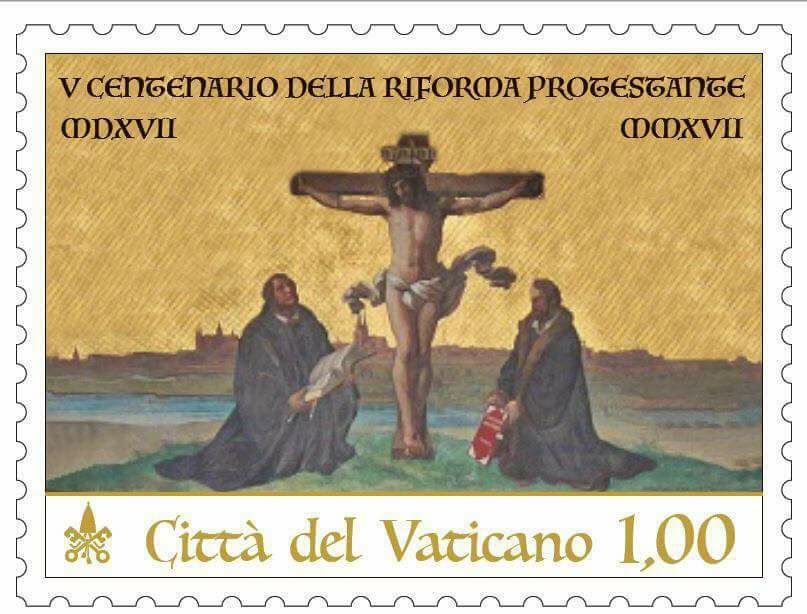 On October 31st 2016, Pope Francis inaugurated the year of Luther by meeting with representatives of Lutheranism from all over the world in the Swedish Cathedral of Lund. Since then, meetings and “ecumenical” celebrations ad abundantiam have followed one after the other in the Catholic Church.

A year exactly from that date, the “”Lutheran turning point ”was sealed by a symbolic act the gravity of which very few have noticed. The Vatican Post Office issued a stamp which celebrates the birth of Protestantism on October 31st 1517, the date Luther hung his 95 theses on the door of Wittenberg Cathedral.

“V Centenary of the Protestant Reformation”can be read at the top of the stamp, presented on October 31st of this year by the Vatican Philatelic Office. The official communiqué describes the stamp: “It depicts Jesus Crucified in the foreground on a gold, timeless background showing Wittenberg city. In an attitude of penance, on their knees respectively on the left and the right of the the Cross, Martin Luther holds a Bible, source and point of his doctrine, while Philip Melanchthon, theologian and a friend of Martin Luther’s, one of the most important protagonists of the Reformation, holds in his hand the Augsburg Confession, Confessio Augustuana, the first official exposition of the principles of Protestantism drawn up by him.”

The substitution of Our Lady and St. John at the foot of the Cross with the two heresiarchs, Luther and Melanchthon is a blasphemous offense that no Catholic cardinal or bishop has, to date, openly condemned. The significance of this image is explained by the joint declaration of the World Lutheran Federation and the Pontifical Council for the Promotion of Christian Unity, published the same day as the stamp. The note refers to the positive outcome of the dialogue between Catholics and Lutherans, endorsing the “new understanding of those XVI century events which lead to our separation” and affirms how both sides are “very grateful for the theological and spiritual gifts received through the Reformation”.

Father Pani is the same priest who said in 2014 that the Fathers of the Council of Trent had admitted the possibility of divorce and remarriage in the case of adultery, according to the custom established in the schismatic Greek Church. Now he is sustaining that Martin Luther was in no way a heretic, but an authentic “reformer”. In fact, “ the theses of Wittenberg are not a challenge, nor a rebellion against authority, but the proposal to renew the proclamation of the Gospel, in the sincere desire for a “reform” in the Church”. (p.128). Despite the claim “ by the Church of Rome and Luther of incarnating the truth in toto and being dispensers of it ” “ the role Luther had as a witness to the faith cannot be denied: He is “the reformer”; he was able to initiate a process of “reform” where the results of it have also benefited the Catholic Church.”

If this is the case then he has been unjustly persecuted and defamed by the Catholic Church for 500 years. The time has come to rehabilitate him. And in order to rehabilitate him we cannot limit ourselves to presenting only his prophetic side, but must make the Church accept and put into practice his demands of reform. And the Post-Synod Exhortation Amoris Laetitia represents a decisive stage on this path. They are not wrong then the authors of the Correctio filialis (to Pope Francis) when they underlined “the affinity between Luther’s ideas on the law, justification and matrimony and those taught or favored by Pope Francis in Amoris laetitia and elsewhere.”

At this point it should be remembered that Pope Francis, like Father Pani, belongs to the Company of Jesus, whose Founder, St. Ignatius of Loyola, was the champion of the Faith that Divine Providence raised up in the XVI century against Lutheranism. In Germany, apostles like St. Peter Canisio and Blessed Peter Fabro, fought every inch of the way against the heretics and on the terrain of anti-Protestant controversy no-one can surpass St. Robert Bellarmino.

La Civiltà Cattolica was founded in 1850, with the support of Pius IX, and had a role of doctrinal defense against the errors of the time for a very long time. From its very first edition, on April 6th 1850, it dedicated an extensive anonymous essay (by Father Matteo Liberatore) on The Political Rationalism of the Italian Revolution, in which he saw Protestantism as the cause of all modern errors. These theses were developed, among others, by two famous Jesuit theologians: Fathers Giovanni Perrone (Protestantism and the Rule of the Faith, La Civiltà Cattolica, Rome 1853, 2 voll.), and Hartmann Grisar (Luther, Herder, Freiburg im Breisgau, 1911/1912, 3 voll.).

But the commemoration of the Lutheran revolt made by the Jesuit journal in October 1917, the fourth centenary marking the 95 theses in Wittenberg, takes on a special meaning. (Luther and Lutheranism, in La Civiltà Cattolica, IV (1917), pp. 207-233; 421-430). The theologian of La Civiltà Cattolica explained that “The essence of the Lutheran spirit, or rather Lutheranism, is rebellion in all of its extension and in all the force of its word. Rebellion, therefore, which is personified in Luther, was varied and profound, complex and very vast; which apparently appeared but was in fact violent, angry, trivial, obscene and diabolic; deep down it was studied, and directed according to the circumstances, focused on opportunistic ends and interests, intended and wanted with measured, resolute determination.” (pp.208-309).

Luther, La Civiltà Cattolica continues, “initiated that contemptible parody, with which the rebel monk attributed to God, his ideas, blasphemies and the abominations of his perverted mind: he outraged the Pope in an unspeakable way in the name of Christ, he cursed Caesar in the name of Christ, he blasphemed against the Church, against bishops, against monks with absolute infernal impetuosity, in the name of Christ; he threw his religious habit onto the tree of Judas, in the name of Christ and in the name of Christ he was married sacrilegiously” (p.209). “With the very convenient pretext of following Scripture, as that which alone contains the word of God, he conducted a war on scholastic theology, tradition, canon law, all the institutions and precepts of the Church and councils: in place of these august and venerated things, he, Martin Luther, perjured monk and self-proclaimed doctor, put himself and his authority! Popes, doctors and Holy Fathers were no longer of any worth; the word of Marin Luther was worth more than all of them! (p.212). The Lutheran theory of justification, in the end, “was born of Luther’s imagination, not by the Gospel or any other word of God revealed to the writers of the New Testament: for us, every Lutheran novelty finds its origins in the concupiscence he stimulated, and in his development of the falsification of Scripture or in formal lying” (p.214

Father Pani cannot deny that the opinion he gives of Luther is a 360 degree turnaround from the one his confreres gave in the same journal, a century ago. In 1917, he was censured as an apostate, a rebel, a blasphemer; today he is being praised as a reformer, a prophet, [even] holy. No Hegelian dialectic can harmonize yesterday’s judgment with today’s. Luther was either a heretic who denied some basic dogmas of Christianity, or he was a “witness to faith” who initiated the Reformation of the Church, brought to completion by the Second Vatican Council and Pope Francis.

In short, every Catholic is called upon to choose whether to side with Pope Francis and the Jesuits of today, or be alongside the Jesuits of yesterday and the Popes of all time.

It is time for choices and to mediate precisely on St. Ignatius’ two standards (Spiritual Exercises, n. 137)* which will help us make them in these difficult times.