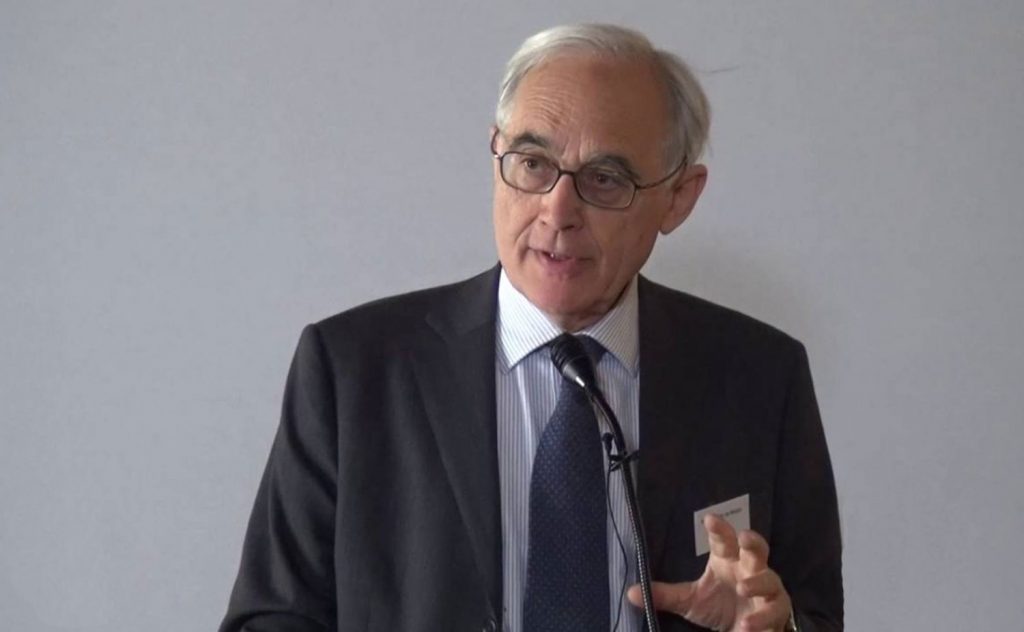 Professor Edward Peters is a reliably orthodox scholar who wants to contain the damage of the Post-Synodal Exhortation Amoris laetitia by relying on the defense of canon law, in particular Canon 915 of the new Code of Canon Law, which says: “Those who have been excommunicated or interdicted after the imposition or declaration of the penalty and others obstinately persevering in manifest grave sin are not to be admitted to holy communion” (cf. E. Peters,  Three ways to not deal with Canon 915, in “The Catholic World Report”, Jan. 24, 2017, and Some remarks on the de Mattei interview, in “The Catholic World Report”, Dec. 13, 2017, in which he criticizes my interview published at “OnePeterFive” on December 11, 2017).

To this end he attempts to minimize the “Rescriptum ex audientia SS.mi” of June 5, 2017, rendering the two documents to which were attached to it practically irrelevant on the theological and canonical level (cf. On the appearance of the pope’s letter to the Argentine bishops in the Acta Apostolicae Sedis, in In the Light of the Law – A Canon Lawyer’s Blog, Dec. 4, 2017).

I will try to explain why this position, although motivated by good intentions, seems to me to be both weak and dangerous.

With regard to canon law I refer to the study of a talented Italian canonist who uses the pseudonym Augustinus Hipponensis. He observes that when Canon 915 speaks of “those who obstinately persevere in manifest grave sin,” it is not referring only to the divorced and remarried, but to a much wider category of persons which also includes, for example, politicians who publicly support legislation favoring abortion or euthanasia, as Cardinal Burke affirmed in one of his articles (Canon 915: The Discipline Regarding the Denial of Holy Communion to Those Obstinately Persevering in Manifest Grave Sin,  in “Periodica de re canonica” (2007), pp. 3-58). The intention of Pope Bergoglio is not to change Canon 915 in toto, but only to expunge from it one category of persons (the divorced and remarried). In order to do this it was not necessary, or even logical, to amend the general norm. The papal rescript intends to deal only with the specific and particular ban (on the divorced and remarried), leaving the general meaning of the law intact. Canon 20 of the new Code effectively allows the canonical legislator to repeal a preceding discipline, even tacitly or implicitly, when the newer law is incompatible with the preceding one, or when the matter of the preceding law is reorganized ex novo [from scratch].

In the present case it seems doubtful that, on the legislative level, the prohibition established in Familiaris Consortio and also by divine law has been removed simply as a result of the exhortation Amoris Laetitia. The Italian canonist writes,

Today, surely it is assumed that the Bishop of Rome, making the Criterios Básicos (of the Argentine bishops) his own and praising them as the only possible interpretation of his exhortation, intended to admit the divorced and remarried – also known as adulterers – to Communion, providing for them a graduality in admission to the Sacrament. Therefore the prohibition – at one time absolute – would no longer be considered so stringent. Certainly, as the Pontifical Council for Legislative Texts declared in 2000, we are dealing with a prohibition of divine law. Of this there is no question. And yet then this means that there is an indisputable difference between the human law [of Amoris Laetitia] and the divine law, which must be acknowledged, without trying to avoid it by affirming that the two documents are irrelevant and without wanting to draw out the logical theological and canonical consequences.

As for the theological aspect of the question, permit me to define the erroneous, or at least minimalist, conception of the Magisterium of the Church which Professor Peters seems to have. The ordinary Magisterium, exercised day by day by the Church, includes the encyclicals, decrees, pastoral letters, and dicourses of the Pope and Bishops throughout the world. Almost the entirety of the teaching of Pius XII on the matter of the regulation of birth was expressed in discourses, such as those to obstetricians or Catholic doctors, whose value as authentic Magisterium would have to be negated if we apply the reductive vision of Professor Peters.

The hundreds of ecclesiastical documents gathered in the Enchiridion Symbolorum definitionum et declarationum de rebus fidei et morum of Heinrich Denzinger (1819-1883), updated to the present day, include constitutions, bulls, briefs, motu proprio, decrees, encyclicals, exhortations, and apostolic letters of every type, and taken together, constitute the depositum fidei of the Church. Few of these acts are infallible by themselves. But the ordinary Magisterium can become infallible when it is universal, in the sense of being continually repeated.

The instruction Ad Tuendam Fidem of the Congregation for the Doctrine of the Faith of May 18, 1998 (AAS, 90 (1998), pp. 542-551), reiterates that a doctrine is to be understood as infallibly proposed when, although no solemn form of definition exists, “this doctrine pertains to the patrimony of the depositum fidei and is taught by the ordinary and universal Magisterium” (n. 2). As the Congregation for the Doctrine of the Faith explains, in order for the ordinary universal Magisterium to be considered infallible it must be “intended in a diachronic, and not necessarily only in a synchronic, sense (New formula of the “Profession of Faith” of June 29, 1998). In this regard, “in the Encycicals Veritatis Splendor, Evangelium Vitae, and in the same Apostolic Letter Ordinatio Sacerdotalis, the Roman Pontiff intended, although not in a solemn form, to confirm and reaffirm doctrines which belong to the teaching of the ordinary and universal Magisterium, and which therefore must be held in a definitive and unequivocal manner” (Doctrinal Commentary of the CDF on the Concluding Formula of the Profession of Faith).

On December 2, 2017, the Vatican communicated that on June 5 of this year Pope Francis conferred the status of “authentic Magisterium” on the letter sent by him on September 5, 2016, to the bishops of the region of Buenos Aires. The text of the letter together with the “Criterios básicos” laid down by the Argentine bishops was published, in the form of an Epistula Apostolica [Apostolic Epistle], in Acta Apostolicae Sedis, the official register of the Apostolic See (volume 10, 2016, pp. 1071-1074). The two documents were promulgated with a rescript ex audientia SS.mi, signed by the Secretary of State Cardinal Pietro Parolin, who, in addition to seeing to the publication of the two preceding texts, qualified them as expressions of the authentic Magisterium (Summus Pontifex decernit ut duo Documenta quae praecedunt edantur per publicationem in situ electronico Vaticano et in Actis Apostolicae Sedis, velut Magisterium authenticum).

This document, like the Apostolic Exhortation Amoris Laetitia, certainly belongs to the ordinary Magisterium of the Church. As Fr. Brian Harrison has rightly pointed out, in a textpresented by another illustrious scholar, Professor Paolo Pasqualucci, Apostolic Epistles [Epistulae apostolicae] are of a higher level than Apostolic Letters [Litterae apostolicae], than Motu Proprio, and even than Apostolic Constitutions, such as the one with which John Paul II promulgated the Catechism of the Catholic Church [Fidei Depositum, October 11, 1992]. John Paul used an Apostolic Epistle to promulgate what came to be considered as a definition ex cathedra proclaiming an infallible truth of the second category (definitive tenenda); namely, that only men can be ordained as priests (Ordinatio Sacerdotalis, 1994). The infallible character does not come automatically from the nature of an Apostolic Epistle, but from the fact that the teaching of the Pope confirmed the perennial teaching of the Church. Therefore, not incorrectly, Cardinal Francesco Coccopalmiero, President of the Pontifical Council for Legislative Texts, declared on December 5, as reported by Catholic News Service:

The fact that the pope requested that his letter and the interpretations of the Buenos Aires bishops be published in the AAS means that His Holiness has given these documents a particular qualification that elevates them to the level of being official teachings of the church. … While the content of the pope’s letter itself does not contain teachings on faith and morals, it does point toward the interpretations of the Argentine bishops and confirms them as authentically reflecting his own mind,” the cardinal said. “Thus together the two documents became the Holy Father’s authentic magisterium for the whole church.

The Epistula of Pope Francis sweeps away every “hermeneutic of continuity,” affirming with authority that the only correct interpretation of chapter 8 of the Apostolic Exhortation Amoris Laetitia is the one held by the bishops of Buenos Aires in their pastoral letter of September 5, 2016 (“There are no other interpretations [No hay otras interpretaciones]”). In article 6 of this letter, the bishops affirm that

If one arrives at the recognition that, in a particular case, there are limitations that diminish responsibility and culpability [cf. 301-302 of AL], particularly when a person judges that he would fall into a subsequent fault by damaging the children of the new union, Amoris Laetitia opens up the possibility of access to the sacraments of Reconciliation and the Eucharist [cf. footnotes 336 and 351 of AL].

According to Peters, the two documents of Pope Francis do not contain any assertions concerning faith and morals, but only disciplinary provisions. But a normative act having a disciplinary character in a matter of faith and morals is always an act of the Magisterium. Denzinger is full of disciplinary and/or pastoral provisions, such as the responses of Pope Nicholas I (858-867) “Ad consulta vestra” to  the Bulgarians of November 13, 866, which ought to be considered acts of the authentic Magisterium. In the case of the Epistula of Pope Francis we are not dealing with a rule having a disciplinary character, but with a new teaching on a matter of morals, which intends clearly to admit adulterers to Communion, foreseeing for them a graduality in admitting them to the Sacrament.

The “hermeneutic of continuity,” or the attempt to interpret erroneous or ambiguous documents in the light of the Tradition of the Church, did not work well even when it was promoted by a Pope like Benedict XVI. Is it not an illusion to pretend to keep using it when it is now the Pope himself who proposes the hermeneutic of discontinuity? Is it not simpler and more logical to remember that there can be errors contained in non-infallible acts of the ordinary Magisterium? “Authentic Magisterium” does not in fact mean “dogmatic,” and if the believer observes, in a reasonably evident manner, a precise opposition between a text of this Magisterium and the divine law of the Church, after accurately studying the matter, he may licitly suspend or negate his assent to the papal document.   This doctrine is found in the writings of the most authoritative theologians, such as Fr. Hugo von Hurter (1832-1914), who affirms:

“If in the mind of the believer there are grave and solid reasons, above all theological, against decisions of the authentic Magisterium (= non-infallible), whether episcopal or pontifical, it will be lawful for him to reject the error, assent conditionally, or finally also to suspend assent” (Theologiae Dogmaticae Compendium,  Wagneriana-Bloud et Barral, Innsbruck-Parigi, 1883, vol. I, p. 492).

Recalling the words of Saint Paul: “But even if we ourselves or an angel from heaven should preach to you a Gospel other than the one that we preached to you, let him be anathema” (Galatians 1:8), St. Vincent of Lerins comments:1

“But why does he say ‘even if we ourselves’ and not ‘even if I myself’? Because he means that also if Peter or Andrew or John or the entire college of the apostles preaches to you a Gospel other than the one that we preached to you, let him be anathema. What tremendous rigor! In order to affirm his fidelity to the primitive faith he spared neither himself nor the other apostles” (Commonitorium, cap. VIII, 2).

The possibility of infidelity to the Tradition of an assembly of bishops, and of Peter himself, however rare, is not excluded. To close one’s eyes to reality means to put oneself in a dead end. Both reason and the sensus fidei demand resistance, including public resistance, to a Pope who promotes, encourages, and favors errors and heresies within the Church.