Minimalism: the present-day sickness of Catholicism 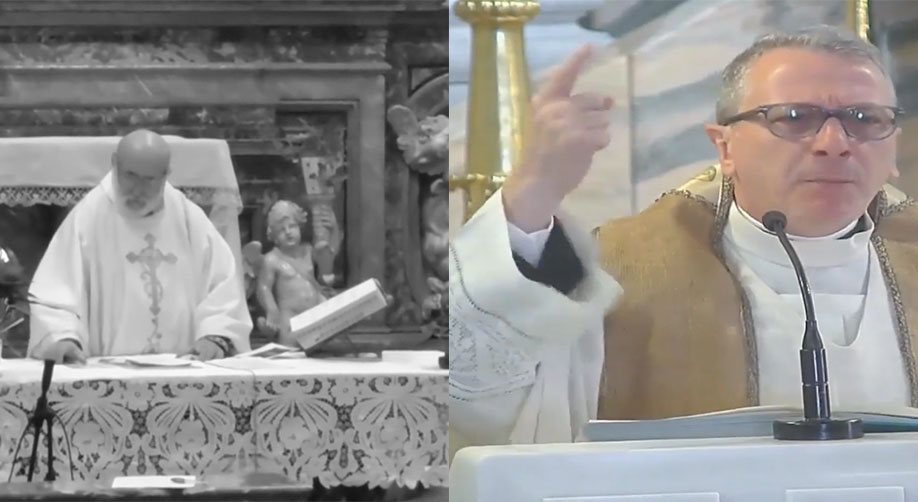 In Italy recently, two videos have been circulating online which give pause for thought.

The first replicates the words of Don Fredo Olivero, Rector of the Church of San Rocco in Turin, uttered during Midnight Mass. “Do you know why I’m not going to say the Creed? Because I don’t believe it!” Amidst the laughter of the faithful, the priest continues: “As if anyone understands it – but as for myself after many years I’ve realized that it was something I didn’t understand and couldn’t accept. Let’s sing something else that presents the essential things of the faith.” The priest then substituted the Creed with the song “Dolce Sentire” from the film “Brother Sun, Sister Moon”.

The Creed sums up the articles of the Catholic Faith. To deny merely one of these articles constitutes heresy. To deny the Creed, in block, constitutes an act of public apostasy. Further, to deny it during Holy Mass, constitutes an intolerable scandal. The removal, suspension a divinis and excommunication of the priest should have been immediate. Yet none of this occurred.

While the media was spreading this incredible news, the lone voice of ecclesiastical reaction came from the other end of Italy, in Sicily, where Don Salvatore Priola, parish-priest and rector of the Marian Sanctuary of Altavilla Milicia, expressed his indignation in a homily against the priest from Piedmont, urging his faithful, and every baptized person, to react publically in the face of such a scandal. A video reports his impassioned words: “Brothers and sisters – he said – when you hear a priest saying things that are against the Catholic Faith, you must have the courage to stand up and tell the priest – even during the Mass: this is not allowed! It’s time to stand up when you hear things that are against our Creed. Even if a bishop says them even if a priest says them. Stand up and say: Father, Your Grace, this is not allowed. Because we have the Gospel: Because we are all under the Gospel, from the Pope down. We are all under the Gospel.

The two opposing homilies call for some reflections. If a priest goes as far as repudiating the Catholic Creed, without incurring sanctions by the ecclesiastical authorities, we find ourselves indeed faced with a situation of crisis in the Church of unparalleled gravity. Even more since the case of Don Frido Olivero is not isolated. Thousands of priests in the world think the same way and act accordingly.

What appears to be something out of the ordinary though, and which consequently merits the total appreciation of true Catholics, is the Sicilian priest’s invitation to stand up in Church and admonish a priest publically, even a bishop, who is giving scandal. This public correction is not only legitimate, but at times a duty.

This is a point that ought to be emphasized. The true cause of the present crisis is not so much in the arrogance of those who have lost the faith, but in the weakness of those, who, conserving it, choose to be silent, rather than defend it publically. This minimalism constitutes our present-day spiritual and moral sickness. For many Catholics, we should not oppose errors, as it is enough “to behave well”, or resistance should be limited to the defense of the negative, moral absolutes, that is to those norms that prohibit always and in every case, specific behaviors against the Divine and moral law. This is sacrosanct, but we must remember that there are not only negative precepts which tell us what we can never do, there are also positive precepts which tell us what we must do; what works and attitudes that are pleasing to God and through which we are able to love our neighbor.

While the negative precepts (thou shalt not kill, steal or commit impure acts) are formulated in concrete terms seeing as they prohibit a specific action always and everywhere, without exceptions, the positive precepts (prayer, sacrifice, love of the Cross) are not specific, as they cannot establish what we must do in every circumstance, yet they are also obligatory, according to the situation. The modernists are improperly spreading “situation ethics” from the positive precepts to the negative ones, in the name of God’s love, forgetting that loving means observing the moral law, as Jesus said: “He that hath my commandments, and keepeth them; he it is that loveth me”. (John 14, 21).

The conservatives for their part, often attest positions of minimalistic morality, forgetting that a Catholic must love God with all their heart, mind, soul and strength (Mark. 12, 28-30). For this St.Thomas Aquinas explains that we are all bound not only to the good, but to the greater good, not at the level of action, but in that of love (Mat. 19, 12). The first moral truth is love. Man must love God above all creatures, and love creatures according to the order established by God. There are negative acts that can never be carried out, under any circumstance. Yet there are positive acts, which, in determinate circumstances are mandatory to carry out. This moral duty does not have its foundation in a negative precept, but in the love of God.

Precepts then have a lower limit: what one cannot do, but they do not have a higher limit since loving God and neighbor have no boundaries and we are perfect in the measure of our love. John Paul II explains it in no. 52 of Veritatis Splendor. “The fact that only the negative commandments oblige always and under all circumstances does not mean that in the moral life prohibitions are more important than the obligation to do good indicated by the positive commandments. The reason is this: the commandment of love of God and neighbour does not have in its dynamic any higher limit, but it does have a lower limit, beneath which the commandment is broken. Furthermore, what must be done in any given situation depends on the circumstances, not all of which can be foreseen.”

We must oppose the theory of the “lesser evil” with that of the “greater good”. At the level of action, the good cannot be determined a priori, since the actions we might carry out are many, uncertain and indeterminate. However, if the greater good presents itself as clear in our conscience, well defined and as such that we can act upon it hic et nunc, negligence is culpable: we have the moral obligation to act on it.

The precept of fraternal correction is among the positive moral precepts. One is not always obliged to do it, and one cannot demand it a duty from others, but each one of us must feel bound to react, faced with public negations of the Catholic Truth. Those who truly love God have to follow the example of Eusebius, the layman, subsequently made a bishop, who, in 423, rose up in public against Nestorius who had denied the Divine Maternity.

Don Salvatore Priola’s exhortation to stand up when we hear things said against the Catholic Faith, is an invitation to manifest our maximalism in loving God and not hide our light under a bushel, but put it in a lamp-stand, [in this way] illuminating the darkness of our times with our example.