The Religious War of the IV Century and of Our Times 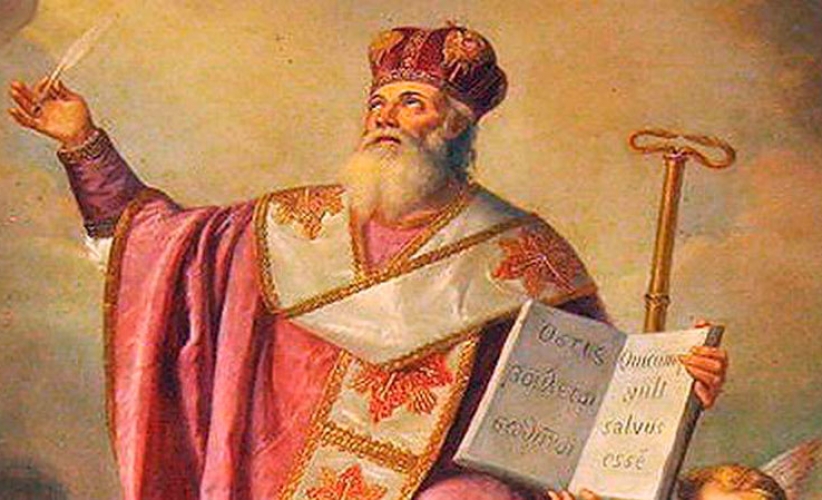 The Church advances through history forever victorious, in accordance with the marvelous plans of God. The first three centuries reached their peak under Emperor Diocletian (284-305). All appeared to be lost.

Discouragement was a temptation for many Christians and among them there were those who lost the faith. But those who persevered had the immense joy, not many years later, of seeing the Cross of Christ blazing on the banners of Constantine at the Battle of Saxa Rubra (312). This victory changed the course of history. The Milan-Nicomedia Edict of 313, granting liberty to Christians, overturned Nero’s senatus consultum, which had proclaimed Christianity a “superstitio illicita”. The public Christianization of society had its beginnings in a climate of enthusiasm and fervor.

In 325, The Council of Nicaea, would seem to mark the doctrinal rebirth of the Church, with the condemnation of Arius, who denied the Divinity of the Word. At Nicaea, thanks to the decisive role of the Deacon, Athanasius ( 295-373), subsequently Bishop of Alexandria, the doctrine of the “consubstantiality” of the nature among the Three Persons of the Most Holy Trinity was defined.

In the years that followed, between the orthodox position and the Arian heretics a “third party” made its way in: that of the “Semi-Arians”, in turn divided amongst themselves into various currents, which acknowledged a certain analogy between the Father and the Son, but denied that He had been “begotten, not made, of one Being with the Father” as was affirmed in the Nicene Creed. They substituted the word omousios, which means “of the same substance” with the term omoiusios, which means “of similar substance”.

The heretics, the Arians and the Semi-Arians, had understood that their success would be dependent on two factors: the first was to remain inside the Church; the second to obtain the support of the political powers, hence of Constantine and afterwards his successors. And indeed it happened so: a crisis, until then unprecedented, inside the Church which lasted for more than sixty years.

Nobody has described it better than Cardinal Newman in his book The Arians of the IV Century (1833), wherein he gathered all the doctrinal nuances of the question. An Italian scholar, Professor Claudio Pierantoni has recently outlined an enlightening parallel between the Arian controversy and the present debate on the Apostolic Exhortation, Amoris laetitia. * However, even in 1973, Monsignor Rudolf Graber (1903-1992), Bishop of Regensburg, when recalling the figure of St. Athanasius, on the XVI centenary of his death, had compared the crisis of the IV century to that following the Second Vatican Council (Athanasius und die Kirche unserer Zeit: zu seinem 1600 Todestag, Kral 1973).

Athanasius was harshly persecuted even by his confreres for his fidelity to orthodoxy, and between 336 and 366 was five times forced to abandon the city in which he was Bishop, thus spending long years in exile and strenuous combat in defense of the Faith. Two assemblies of bishops, at Caesarea and Tyre (334-335) condemned him for rebellion and fanaticism. Further, in 341, while a Council of fifty bishops in Rome had proclaimed Athanasius innocent, the Council at Antioch, in which more than ninety bishops took part, ratified the Acts of the Synods of Caesarea and Tyre and put an Arian in the place of Athanasius as bishop.

The subsequent Council of Serdica, in 343, ended with a scission: the Western Fathers declared the deposition of Athanasius illegal and reconfirmed the Council of Nicaea: those from the East condemned not only Athanasius, but also Pope Julius I, (afterwards canonized), who had supported him. The Council of Sirmium in 351, sought a middle ground between Catholic orthodoxy and Arianism. At the Council of Arles in 353, the Fathers, including the legate representing Liberius, who had succeeded St. Julius I as Pope, signed a new condemnation against Athanasius.

The bishops were forced to choose between the condemnation of Athanasius and exile. St. Paulinus, Bishop of Trier, was almost the only one in the battle for the Nicene Creed and was exiled to Phrygia, where he died following mistreatment at the hands of the Arians. Two years later, at the Council of Milan, (355), more than three hundred bishops of the West, signed the condemnation of Athanasius and another orthodox Father, St. Hilary of Poitiers, was banished to Phrygia for his intransigent fidelity to orthodoxy.

In 357, Pope Liberius, overcome by the sufferings of exile and at the insistence of his friends, but also driven by “a love for peace”, signed the Semi-Arian formula of Sirmium and broke communion with St. Athanasius, declaring him separated from the Roman Church, for his use of the term “consubstantial” as is testified in four letters transmitted to us by St. Hilary (Manlio Simonetti, La crisi ariana del IV secolo, Institutum Patristicum Augustinianum, Roma 1975, pp. 235-236).

Under the pontificate of the same Liberius, the Councils of Rimini (359) and Seleucia (359), which constituted a Great Council, representative of the West and the East, abandoned the term “consubstantial” of Nicaea and established an equivocal “middle way” between the Arians and St. Athanasius. It seemed as if rampant heresy had conquered the Church.

The Councils of Seleucia and Rimini are not numbered by the Church today in the eight ecumenical councils of antiquity: there were, nonetheless, as many as 560 bishops present, almost the totality of the Fathers of Christianity, who were defined as “ecumenical” by their contemporaries. It was then that St. Jerome coined the phrase wherein “the whole world groaned and woke astounded to find itself Arian” (Dialogus adversus Luciferianos, n. 19, in PL, 23, col. 171).

What is important to underline is that it wasn’t about a doctrinal dispute limited to some theologian, nor a simple clash between bishops where the Pope had to act as an arbiter. It was a religious war in which all Christians were involved, from the Pope down to the last faithful. Nobody closed themselves up in a spiritual bunker, nobody stood looking out the window, a mute spectator of the drama. Everyone was down in the trenches fighting on both sides of the battle-lines.

It wasn’t easy at that time to understand whether your own bishop was orthodox or not, but the sensus fidei was the compass to orient oneself. Cardinal Walter Brandmüller while speaking in Rome on April 7th 2018, recalled how “the ‘sensus fidei’ acts as a sort of spiritual immune system, through which the faithful instinctively recognize or reject any error. Upon this ‘sensus fidei’ rests then – apart from the Divine promise – also the passive infallibility of the Church, or the certainty that the Church, in Her totality, shall never be able to incur a heresy.”

St. Hilary writes that during the Arian crisis the ears of the faithful who interpreted in an orthodox sense the ambiguous affirmations of the Semi-Arian theologians were holier than the hearts of the priests. The Christians who for three centuries had resisted emperors, were now resisting their own Shepherds, in some cases even the Pope, guilty, if not of open heresy, but to say the least, of grave negligence.

Monsignor Graber refers to the words of Joseph von Görres (1776-1848), in his book Athanasius (1838) written at the time of the arrest of the Archbishop of Cologne, but it is even today of extraordinary veracity: “The earth is shaking under our feet. We can foresee with certainty that the Church will emerge unscathed from such ruin, but nobody can say and conjecture who and what will survive. We, then, in advising, in recommending and raising our hands, would like to impede the evil by showing its signs. Even the mules who carry the false prophets, bristle, pull-back and with human language throw back the injustice in the face of those striking them; those who do not see the sword drawn (by God) which closes off the way to them (Numbers, XXII, 22-35). Work then while it is day, since at night nobody can. It serves nothing to wait: waiting has done nothing more than aggravate things.”

There are times when a Catholic is obliged to choose between cowardice and heroism, between apostasy and holiness. This is what happened in the IV century and it is what is happening even today.