Italy is changing, but Mattarella is unaware of it 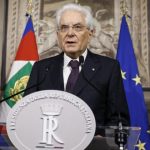 On Sunday May 27th,  Professor Giuseppe Conte, appointed by the President of the Republic Sergio Mattarella to form a government, arrived at the “Palazzo del Quirinale” to present the list of his ministers, fruit of an intense work of collaboration between the political representatives of the two main parties in Parliament: “Movimento Cinque Stelle” and “La Lega”.

END_OF_DOCUMENT_TOKEN_TO_BE_REPLACED

Building the Future on the Natural and Divine Law 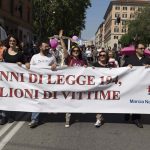 Forty years ago, on May 22 1978, under the name of Law 194 for the termination of pregnancy, state murder was introduced in Italy by a Christian Democrat ruling class. Murder, since Law 194 establishes the legitimacy of suppressing an innocent human-being in their mother’s womb; it is state murder, since this crime is approved, organized and financed by the Italian State; it is mass-murder, since there have been around six million victims of abortion in Italy, according to official estimates; it is a figure far superior to the total number of deaths in wars and natural disasters since the birth of the Italian State (1861) until today. END_OF_DOCUMENT_TOKEN_TO_BE_REPLACED