The Church and the Men of the Church 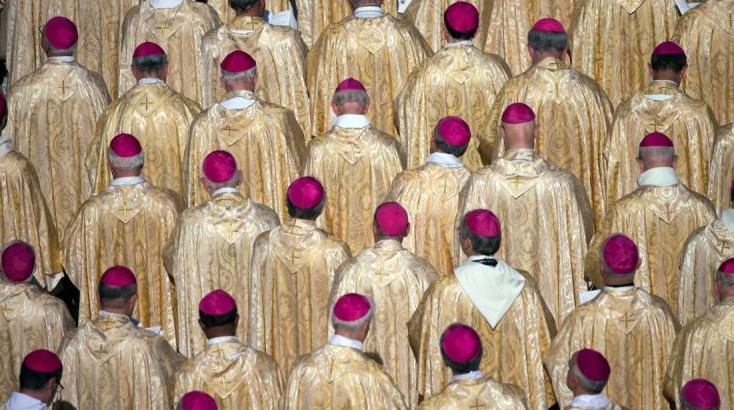 The courageous denunciation of ecclesiastical scandals made by Archbishop Carlo Maria Viganò has generated the consensus of many, but also the displeasure of others, convinced that everything discrediting the representatives of the Church should be covered up by silence.

This desire to safeguard the Church is understandable when the scandal is an exception. There is the risk in that case of generalizing, by saddling the behavior of a few onto everyone . Quite different is the case when immorality is the rule, or at least is a widespread way of living accepted as the norm. In this case public denunciation is the first step towards the necessary reform of “morals”. Breaking the silence is part of the duties of a pastor, as St. Gregory the Great admonishes: “What in fact is the fear of a pastor to state the truth, if not the turning of his back on the enemy with his silence? If, instead, he fights in defense of his flock, he builds a bastion for the House of Israel against its enemies. For this the Lord through the mouth of Isaiah admonishes: “Cry, cease not, lift up thy voice like a trumpet” (Isaiah, 58,1).

At the origins of a guilty silence there is often the lack of distinction between the Church and the men of the Church, be they the simple laity, bishops, cardinals or Popes. One of the reasons for this confusion is precisely the prominence of the authorities involved in the scandals. The higher their dignity, the more the tendency to identify them with the Church, attributing good and evil indifferently to the one and the other. In reality the Good is the sole business of the Church, whereas all the Evil is due to the men who represent Her. For this the Church cannot be defined as sinful: “She – writes Father Roger T. Calmel O.P. (1920-1998) – asks forgiveness to the Lord not for the sins She has committed, but for the sins committed by Her children, insofar as they do not listen to Her as Mother.” (Breve apologia della Chiesa di sempre, Editrice Ichtys, Albano Laziale 2007, p. 91). All the members of the Church whether of the teaching or student parts, are men, with their own nature, wounded by original sin. Neither Baptism renders the faithful faultless, nor Holy Orders render the members of the Hierarchy such. The Pope himself can sin and fall into error, except for that which concerns the charism of infallibility.

It must be said, moreover, that the faithful do not constitute the Church, as happens in human societies, created by the members that form them and dissolved as soon as they separate. To say “We are Church” is false, since the belonging of the baptized to the Church, does not derive from their will: it is Christ Himself who invites us to belong to His flock, by repeating to everyone: “You have not chosen me but I have chosen you” (John 15, 16). The Church founded by Jesus Christ has a Human-Divine constitution: human as it has a material and passive component, made up of all the faithful, part of both the clergy and the laity; supernatural and divine for Her soul. Jesus Christ, Her Head, is Her foundation and the Holy Spirit is Her supernatural propeller.

The Church therefore is not holy because of the holiness of Her members, but it is Her members that are holy thanks to Jesus Christ Who directs Her and the Holy Spirit Who gives life to Her. From them comes all Good, that is, all that is “true, noble, just, pure, lovable, honorable and worthy of praise” (Phil. 4,8). And from the men of the Church comes all the Evil: disorders, scandals, abuse of power, violence, turpitudes and sacrileges.

“So – writes the Passionist theologian Enrico Zoffoli (1915-1996) who dedicated many fine pages to this theme – we have no interest in covering up the faults of bad Christians, of unworthy, cowardly, inept, dishonest and arrogant priests. The intent to defend the cause and mitigate their responsibilities would be ingenuous and useless along with minimizing the consequences of their errors, having recourse to historical contexts and singular situations in order then to explain away and absolve everything” (Chiesa e uomini di Chiesa, Edizioni Segno, Udine 1994, p. 41).

Today there is great filth in the Church, as the then Cardinal Ratzinger said during the Via Crucis of Good Friday 2005, which preceded his rise to the papacy. “How much filth there is in the Church, and even among those who, in the priesthood, ought to belong entirely to Him! (Jesus)”.

Monsignor Carlo Maria Viganò’s testimony is praiseworthy, since, by bringing to light this filth, he renders the work of purification of the Church more urgent. It must be [made]clear that the conduct of unworthy bishops or priests is not inspired by the dogmas or morals of the Church, but constitutes their betrayal, as it represents a negation of the law of the Gospel. The world that accuses the Church for Her faults accuses Her of transgressing a moral order: but in the name of what law and doctrine does the world claim to indict the Church? The philosophy of life professed by the modern world is relativism to the degree that there are no absolute truths and the only law of man is to be devoid of [all] laws; the practical consequence is hedonism according to which the only form of possible happiness is the gratification of one’s desires and the satisfaction of one’s instincts.

How can the world, devoid of principles as it is, judge and condemn the Church? The Church has the right and duty to judge the world because She has an absolute and immutable doctrine. The modern world, child of the principles of the French Revolution, develops with coherence the ideas of the libertine Marquis de Sade (1740-1814): free love, free blasphemy, total freedom to deny and destroy every bastion of Faith and Morals, as in the days of the French Revolution when the Bastille, where Sade was a prisoner, was destroyed. The outcome of all this is the dissolution of morality, which has destroyed the foundations of civil society and over the last two centuries has created the darkest age in history.

The life of the Church is also the history of betrayals, defections, apostasies and insufficient correspondence with Divine Grace. But this tragic weakness always goes along with extraordinary faithfulness: the falls, even the most terrifying, of many members of the Church, are interlaced with the heroism of the virtue seen in many other of Her children.

A river of sanctity gushes out of the side of Christ and runs flowing through the course of the centuries: the martyrs who face the wild animals in the Coliseum; the hermits who abandon the world to live a life of penitence; the missionaries who go to the ends of the earth; the intrepid confessors of the faith who combat schisms and heresies; the contemplative religious who sustain the defenders of the Church and Christian civilization with their prayers; all those, who, in different ways, have conformed their lives to the Divine one. St. Theresa of the Child Jesus wanted to gather up all these vocations in one supreme act of love to God.

The saints are different from one another, but what they all share is union with God: and this union, which never flags, makes it so that the Church, prior to being One, Catholic and Apostolic, is first of all perfectly Holy. The holiness of the Church doesn’t depend on the holiness of Her children; it is ontological, given that it is connected to Her very nature.

For the Church to be called holy it is not necessary that all Her children live a saintly life; it is enough that a part, even a small part, thanks to the vital flow of the Holy Spirit, remain heroically faithful to the law of the Gospel during times of trial.