The Two Souls of the Yellow Gilets 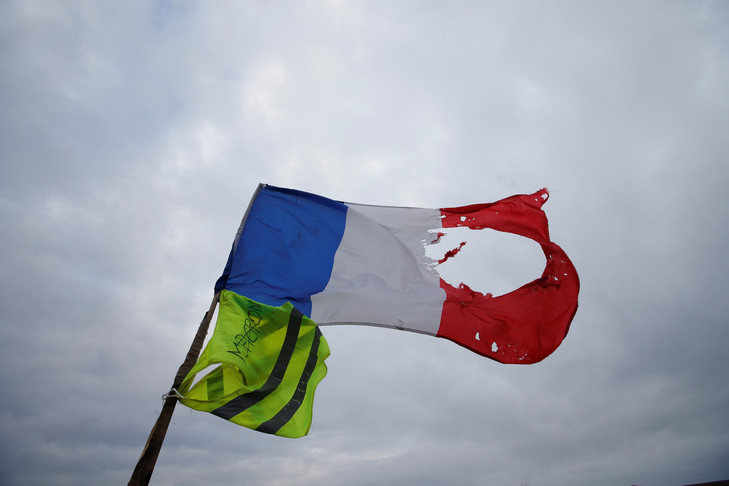 The “reverse turn” of Emmanuel Macron’s République en Marche,  confronted by the advance of the “gilets jaunes”, reveals the significance of the protests which have erupted in France over the last few weeks.

The prime target of the protest was the arrogant French President, who, in his discourse to the nation on December 10th had to admit the failure of his policies. But Macron is the embodiment of the European technocratic powers and his failure, moreover, is the economic and social muzzle imposed on France by the Eurocrats. The political winners of this arm wrestling, for the moment, are the defeated political parties of the 2016 presidential elections. The  Rassemblement National of Marine Le Pen and La France insoumise of Jean-Luc Mélenchon ( which had obtained 47% of the votes in the first ballot against Macron’s 24% and were defeated in the second ballot) have now been vindicated.

The operative word of these parties, as Eric Zemmour observes, is “sovereignty”: «Souveraineté de la nation et souveraineté du peuple. Souveraineté de la nation contre l’oligarchie européenne. Souveraineté du peuple contre les élites françaises qui l’ont bradée» (Le souverainisme à deux visages, in Le Figaro, 6 May 2016).  Today, according to surveys, the appeal to sovereignty is shared by more than 60% of French people, as is happening in Italy, where a percentage of voters equally strong, support Prime Minister Giuseppe Conte’s government. Many observers have highlighted the similarities between the revendications of the gilets jaunes and the agreement of the Lega –Five Star government. The first are in the opposition and the second are governing, but the European elections are at the door and these may change the political horizon, beginning  precisely with France.

Another word resonates alongside that of sovereignty: “populism”. The traditional right-left bipolarity, it seems, is being replaced by the dichotomy of the people-elites.  The new dialectical opposition is hypothesized both by Trump’s former advisor, Steve Bannon and the political scientist dear to Putin, Aleksandr Dugin, who asserted: “Today the left and the right no longer exist: only the people against the elite [exist]. The “yellow waistcoats” are creating new political history, a new ideology.”

Yet, is the dichotomy of the left and the right truly on the wane? And is the new people-elites dialectic an authentic alternative to the former?

From the historical-political viewpoint, both these concepts originate with the French Revolution, which marked the end of Christian civilization, and the rise of a “profane” political space.  In 1789, when the General States assembled together in Versailles, the French Monarchic State was characterized by a social tripartite. At the top were the clergy and the nobility, at the bottom the Third State. After the dissolution of the General States, in the National Assembly, the defenders of the Throne and the Altar were located on the right, and on the left, were the liberals and the republicans. The first defend the upper class, the second the people – in the lower ranks. The two metaphors, those of the vertical and horizontal, are interconnected.

Throughout its history, it was always the left that made the people its exclusive subject for the political life of the nation, by proposing a conception of sovereignty contrary to the traditional one. For Rousseau and Abbé Sieyes, both intellectual fathers of the French Revolution, sovereignty resides infallibly in the people, who cannot in any way alienate their power by delegating it and dividing it. A well-known historian, George Mosse (1918-1999) emphasized how the aberrant “cults” of the French Revolution were nothing other than the dress-rehearsal for the adoration of the “general will” proposed by the modern totalitarianisms.

The role of minorities in the governing of a society was underlined by all the great masters of political thought, from Plato to Aristotle right through to the modern school of political science originating in Italy at the beginning of the 20th century by Gaetano Mosca, Vilfredo Pareto and Roberto Michels.  By studying politics as a “science”, this line of thinking has documented how, in all human societies, the political direction of the society is always affirmed by an organized minority, defined as elite.

The word “elite” is the modern transcription of “aristocracy” which means, etymologically, government of the best.  When a governing class is corrupted, from being elite, it becomes a financial, party-politicking oligarchy, or even of another type, but always characterized by the fact of egotistically pursuing personal or group interests.  On the contrary, the elite is a governing class that subordinates its own interests for that of  a Nation’s common good.

What distinguishes an elite, as Plinio Corrêa de Oliveira underlines, is being disposed to sacrifice its own interests in order to serve the common good which is the highest interest of society (Nobiltà ed élites tradizionali analoghe nelle allocuzioni di Pio XII al Patriziato e alla  Nobiltà, Marzorati, Milano 1993). Pius XII calls being “an elite, is not only through blood or lineage, but most of all through works and sacrifice, creatively carrying out services to all social communities.” (Discourse to the Patriciate and the Roman Nobility, January 11, 1951).

After the fall of the Communist and Nazi totalitarianisms, representative democracy, apparently the winner, slides towards its definitive collapse. What has happened in fact in the previous two centuries, and has amplified over the last twenty years, is a process in the “pyramidization” of society which has seen new oligarchies replacing the traditional elites. In 1995, a posthumous essay by Christopher Lasch appeared, dedicated to The Revolt of the Elites and the Betrayal of Democracy (tr. it. Feltrinelli, Milano 1995), in which the American historian accuses the new elite of having betrayed Western values, by closing themselves up in an artificial and globalized environment, faraway from the real problems of society.

The anti-elitism that distinguishes the thought of Noam Chomsky, is however, a piece de resistance of the left.

Yves Mamou, in Le Figaro of December 4th , states that the gilets jaunes, are not a Revolution, but a movement of “national Restoration” against the Revolution imposed over the last 30 years by the political, economic and administrative elites. The analysis is correct if it refers to the soul of the protest, which, however, has at least two: one on the right and one on the left. The first incarnates the real France; the France of farmers, artisans, tradesmen, shopkeepers, professionals and soldiers; the France of real wealth, which is, above all, moral wealth, as it is founded on sacrifice and a patrimony of common values. The second is the France of social hatred, which derives directly from the French Revolution. The dream is that of a democracy directed by the Jacobins, the Anarchists and the Trotskyites who are seeking vindication, following the failure of the bureaucratic, Marxist-Leninist State. Two souls that converge in a “sovereignist” and “populist” piazza, in front of which, however, another piazza is sharpening its weapons in the shadows.

The immigrants of the first, second and third generations were absent from a revolt that had the rejection of immigration among its objectives – but they won’t stay silent for long. The future scenario that sees the gilets jaunes as protagonists, appears  destined to be overlapped with that suggested by Laurent Obertone in his visionary novel:  Guerilla: Le jour où tout s’embrasa (tr. it. Signs Publishing 2017). While the  Fifth Republic is revealing its vulnerability, the piazzas ready to explode in France are now two: the multicultural one and the sovereign-populist one. And if France explodes, Europe explodes.