The Catholic Resistance has made itself heard 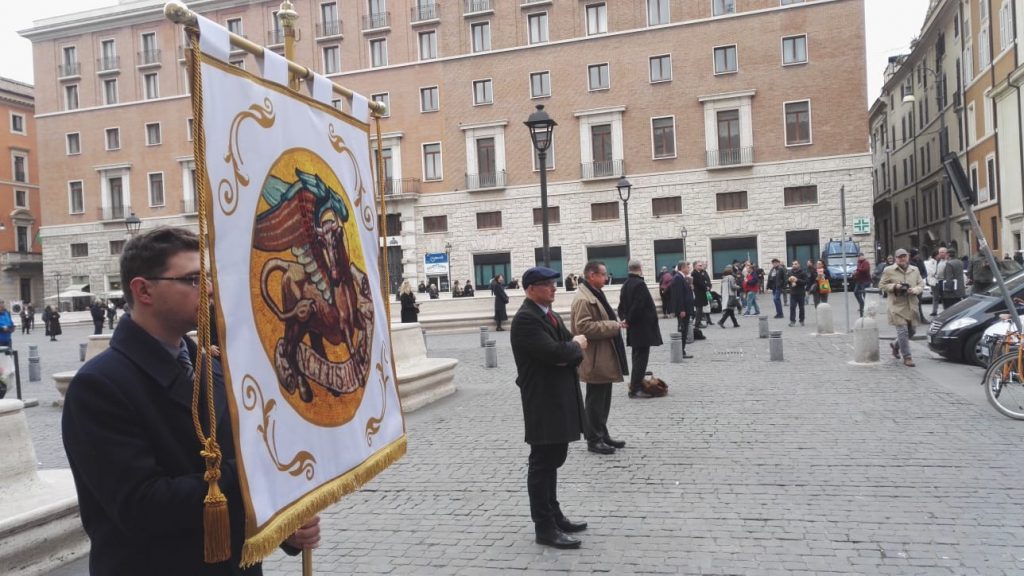 According to the traditional calendar, the first Tuesday after Septuagesima – this year falling on February 19 – is dedicated to the Agony of Jesus in the Garden of Gethsemane, which is perhaps the most painful [moment] of His Passion, of spiritual not physical suffering, culminating in the sweating of His blood. (Luke, 22, 43-44).

One of the principal reasons for His sufferings was His vision of unfaithfulness – not only in The Chosen People –  but  in all those during the centuries to come, who would guide the Church, founded by Our Lord Jesus Christ.

Quae utilitas in sanguine meo? (Psalm,29,10). This agonizing question penetrated His Heart and needs to penetrate ours, like a sharp sword. God responded that every act of unfaithfulness, every apostasy, every sacrilege which passed through the centuries, was permitted so that the purity of doctrine and life would shine with even greater splendor in those, who, throughout the course of  the centuries had picked up and held high the blood-stained-banner of the Cross, opposing that of the followers of Lucifer.

Today, as it has always been throughout history, we are experiencing the battle between the two banners: that of the friends of the Cross and that of its enemies, who are not only persecutors, but also unfaithful apostles. The summit taking place over the next few days in the Vatican, in the eyes of many, is like a “confabulation” which has as its program, the diverting the attention of Catholics from the terrible crisis, caused by loss of faith and morals, so as to concentrate  on one problem – the abuse of minors, a limited symptom of a much more extensive and deeper evil.

But, a word of comfort to Our Lord for His sorrows, has certainly come from three events that took place on February 19th. A coalition of lay-people, Acies Ordinata, lined up like an army on a battlefield – a hundred lay Catholics – coming from all over the world,  stood upright in silence,  to “break down the wall of silence created by the Church authorities.”

The demonstration took place right in the centre of Rome in the Piazza San Silvestro, which carries the name of the Church of San Silvestro in Capite, where the relic of the head of St. John the Baptist is kept. The precursor of the Messiah was not silent in front of Herod and underwent martyrdom for having broken silence about his conjugal infidelity.  In this church, after the event, the demonstrators gathered together in prayer, reciting the Holy Rosary.

A little later, in the Foreign Press Room, before a large group of journalists, representing the most important international newspapers, seven Catholic leaders, from different countries, explained the reasons for the silent protest, stressing that it would be a scandal if the Bishops at the summit were silent on the problem of homosexuality, so intimately connected to that of pedophilia.

Lastly, the most authorative voice arrived in the evening, from two princes of the Church, Cardinals Walter Brandmüller and Raymond Leo Burke, who, all but responding to the supplication of the lay-faithful, addressed the Presidents of the Episcopal Conferences gathered in Rome: “The plague of the homosexual agenda is pervasive inside the Church, promoted by organized and protected networks in a climate of complicity and omertà. The roots of this phenomenon are evidently found in that atmosphere of materialism, relativism and hedonism, wherein the existence of an absolute moral law i.e. with no exceptions, is openly put up for debate.  Clericalism is blamed for sexual abuses, but the primary and principle responsibility of the clergy is not in the abuse of power, but of having strayed from the truth of the Gospels. The denial, even in public, in words and facts, of the Divine and natural law, is at the roots of the evil that is corrupting certain environments in the Church. Faced with this situation, cardinals and bishops are silent. Will you also be silent at the meeting convened in the Vatican this coming February 21st?”

We may say that for the first time since the start of this pontificate, the Catholic resistance against the auto-demolition of the Church, has shown itself forcefully and successfully.

The week Pope Francis has chosen to hold this summit of Bishops is precisely the one in the liturgy (February 23 in the ancient and  February 21 in the new) when the great figure of St. Peter Damien is honoured, that Bishop-Cardinal who thundered against sodomy in his book Liber Gomorrhianus. To ignore his teaching, and that of the Catechism itself, as the Shepherds gathered in Rome appear to want to do, is a provocation.  But the voice of St. Peter Damien and the Magisterium of the Church has resounded faithfully in Cardinals and lay-people, who, with their words and actions made themselves heard on February 19.

May Our Suffering Lord in the Garden of Olives and Our Lady of Sorrows, Who along with Him is watching over the agony of the Church, infuse courage and hope in these faithful people.