The Condemnation of Cardinal Pell, the Church and the World 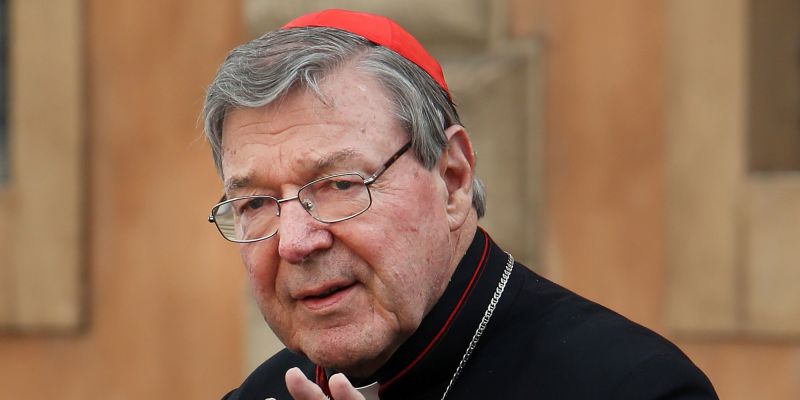 The condemnation of Cardinal Pell, arriving like a bolt of lightning in the wake of the Vatican summit, draws attention to a truth that there has been a desire to forget for the last fifty years: there is no possible compromise between the Church and the world, because the world hates the Church and wants its destruction. This sentence, furthermore, demonstrates the failure of the strategy of this papacy, which has renounced exercising the sovereignty of the Church, confiding instead in the comprehension of the world.

The sovereignty of the Church is expressed primarily in Her Canon Law. The Catholic Church, inasmuch as it is a visible society, is endowed by a law, also penal, the law She possesses to sanction the faithful who have committed violations of Her law.  A crime is a violation outside the judicial order of the Church, distinct from sin, which is, instead, a violation of the moral order. Thus the Church, “by sole and exclusive right”, has the right to judge the violation of Church laws and the right to sanction the crimes with penalties according to Canon Law (can. 1402 §2). Among the many canonical crimes specified by the Code, are apostasy, heresy and schism (Can.1364), communicatio in sacris, the profanation of sacred things (can.1376), and also a series of grave violations against the sixth commandment (can. 1395). The distinction between sins and crimes does not appear clear to Pope Francis, who declares “zero tolerance” against civil crimes, such as pedophilia, but calls for “forgiveness” and mercy for the “sins of youth”, such as homosexuality, unmindful of the presence of this crime in the laws of the Church.

For the laws and a large part of mainstream thinking in Western countries, pedophilia is considered, like rape, an ignominious crime, not however for the immorality of the act in itself, but for the violation that these crimes imply for the rights, in the first case, of children, and in the other, of women.  Following the example of the modern States, the ecclesiastical authorities appear to have reduced some sins from crimes against morality to crimes against the person: sin does not consist in violating the natural law, but consists in preventing with violence, the individual following his personal instincts and tendencies.  Today the Vatican authorities are dealing with crimes such as sodomy as if they were merely private sins, limiting themselves – in full-blown cases – to requesting penitential expiations, without applying the penal sanctions these crimes demand.

The only crimes recognized as such are those sanctioned by the secular States. But even regarding these type of crimes, like pedophilia, the ecclesiastical authorities are today complying with the judgments of guilt or innocence from the civil courts, forgoing investigation and procedure on their own account, except when rendered necessary, in order not to lose “credibility” – as happened in  the “McCarrick case.”  However, the reduction of Cardinal Theodore McCarrick to the lay state, as Sandro Maguister highlighted in a recent article, is fruit of a merely administrative  process, not a judiciary one. (“Settimo Cielo”, 15 February 2019).

The Church however, has the duty to open a proper judicial process against those accused of sexual abuses, without violating their fundamental rights.  Indeed, rights exist not only for those who claim to be victims but also for those who are accused by the victims. They must be judged according to the norms of Canon Law, perhaps first by the State, to establish the veracity of the facts. Once this veracity is established, if identified guilty, they must undergo the correct sanctions; if identified innocent, they must also be defended even against the civil authorities of the State.  The Church, which is endowed with its own penal law and tribunals, must have the courage to challenge the world’s tribunals, being convinced, that it is not up to the world to judge the Church, but the Church to judge the world.

The moral crisis in the Church will not be resolved with the so-called best practices: the practical instructions given by the Organization of Ethics and Health, a secular organism promoting sexual education, which would like to include contraception and abortion in all national programs of family planning; neither by instituting commissions or task forcesof ‘experts’, but [only]through a supernatural vision, which unfortunately is totally absent in Pope Francis’ speech which concluded  the Vatican summit last February 24th.  The consequences being that we hear of greater synodality for the local churches, “open” to  contributions from the secularized world and of the abolition of the papal secrecy, in the interests of “transparency.”  The “culture of secrecy” is the one denounced by Frédéric Martel in his recent booklet aimed at “normalizing” sodomy in the Church.  But what more impenetrable secrecy is there than the secrecy imposed on priests by the Sacrament of confession? This seems to be the next stone the enemies of the Church want to turn over and for which, the sentence of the tribunal in Victoria seems to have paved the way.

In Australia, in the territory of Canberra, a law has been adopted that makes a priest indictable if he does not report cases of abuses against minors, even when the knowledge came  during confession. The law, which applies the recommendations from the Royal Commission (the commission charged by the Australian government to deal with the sexual abuse of minors) was approved last June by the Legislative Assembly of the Territory of the Australian Capital, and extends the mandatory denunciation of the abuse of minors even to the Church and the activities of the Church, including the Confessional.  Among these recommendations, there was, precisely, the idea of making the failure of a priest to denounce molestations and violence against minors, a crime, when he finds out about them during the Sacrament of Confession. (Acistampa, 29 June 2017).

In the meantime, the United Nations has requested Italy to institute an investigating Commission “independent and impartial, to examine all the sexual-abuse cases of children by religious personnel of the Catholic Church”  and are asking  “to make it mandatory for everyone, also for the religious personnel of the Catholic Church, the reporting of any case of presumed violence of minors to the competent authorities of the State.”

The request was made by the UN Committee for the Rights of Children and Adolescents, with their headquarters in Geneva. Lastly, the revision of national Concordats (like the Lateran Treaty with Italy) was requested, in the part where the hierarchy is released from the obligation of denunciation.  In Italy, according to the New Concordat of 1984, “The Italian Republic guarantees that the judiciary authority will give communication to the competent ecclesiastical authorities by  territory of the legal procedures being advanced against churchmen” (Protocollo addizionale n. 2b). This principle would now be overturned, since the UN is asking the Vatican for full cooperation with the civil authorities, who are pursuing abuses in various countries, providing for example, all the information in possession of the Congregation for the Doctrine of the Faith.

The question of mandatory denunciation to the civil authorities, on which Father Lombardi affirmed that  “it is right that it be a theme dealt with at this meeting” (editor’s note – the summit of February 21) opens the door to the request for the violation of the Sacrament of Confession and papal secrecy.

At one time the State was the “secular arm”  of the Church, now the Church would practically become a “secular arm” of the State. But a civil law wanting to impose the violation of the Confessional seal for some crimes, like pedophilia, would be an unjust law, to which priests should oppose with their “non possumus” even unto martyrdom. It is this testimony, and not others, that would render the Church credible, before God, prior to being credible before the world. However, it would be necessary to overturn the relationship the Church has been engaged in with the secularized and anti-Christian world for more than fifty years now.