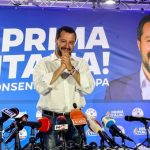 The elections of May 26th were an important episode in a conflict that goes way beyond the destiny of the European Parliament or any national government. In fact, a lobby exists that has as its aim, the destruction of Christian identity and the construction of cosmopolitan organisms that are assuming sovereign power of life and death over its European citizens. An example of this plan is what has just happened in France, where the Paris Court of Appeals handed over to the United Nations Organization, the ultimate decision on the life of Vincent Lambert, the French paraplegic condemned to death by his wife and the doctors at Rheims Hospital, where he is a patient. END_OF_DOCUMENT_TOKEN_TO_BE_REPLACED