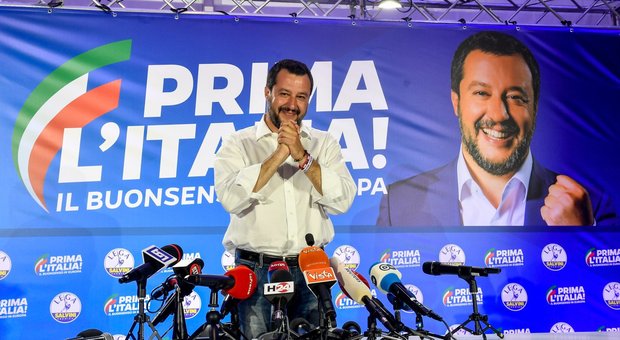 The elections of May 26th were an important episode in a conflict that goes way beyond the destiny of the European Parliament or any national government. In fact, a lobby exists that has as its aim, the destruction of Christian identity and the construction of cosmopolitan organisms that are assuming sovereign power of life and death over its European citizens. An example of this plan is what has just happened in France, where the Paris Court of Appeals handed over to the United Nations Organization, the ultimate decision on the life of Vincent Lambert, the French paraplegic condemned to death by his wife and the doctors at Rheims Hospital, where he is a patient.

It is clear that power of legislation on the life of Lambert does not pertain to the French judges, nor those of Europe or the United Nations. Positive laws, both national and international, do not have their source in the entities that emanate or apply them, but in a divine law that is preexistent to the laws of men and by the laws of men cannot be changed. Now, the natural and divine law prohibits the killing of the innocent and any human law claiming to establish the contrary must be considered a non-law, invalid and iniquitous. Further, inasmuch as the only guardian of the divine and natural law is the Catholic Church, it is first of all up to the men of the Church to proclaim the inalienable right to life. But today the voice of the men of the Church is gone. The only problem the leaders of the Church seem to be interested in is that of hospitality to migrants from outside of Europe. An absolute, unconditional, total hospitality. We are not dealing here with the ancient virtue, whether Christian or secular, of hospitality, but of an ideological choice, wherein the philosophy of hospitality is presented, in reality, as a theory of renouncing European identity, or rather, its replacement.

The concept of “the great replacement” introduced by Renaud Camus (Le Grand Remplacement, David Reinharc, Neuilly-sur-Seine 2011) was developed by Professor Renato Cristin in his book I padroni del caos [The Lords of Chaos] (Liberlibri, Macerata 2017). By way of a rigorous analysis, the author, who teaches philosophy at the University of Trieste, explains how this theory aims at substituting European populations with other populations (Africans, Arabians, Asians, for the most part Muslim) [thus] producing chaos as a concrete historical prospect. Cristin refers to the existence of a 2001 United Nations project in which “replacement migration” is explicitly addressed, in order to deal with the European demographic decline.

The flows of populations are not only an ethnic transplanting, but a toppling of civilization, a “counter-colonization”, in which migrants are seen as bringers of a hybrid civilization or mixed race, opposed to the Christian one which built Europe. The destruction of the national States passes thereby through a policy of replacement, whether it be ethnic or cultural. The cultural replacement consists in the negation of any identity rooted in European Christian tradition; the ethnic replacement occurs with the entry of a human mass of immigrants that substitute the European population, decimated by abortion and contraception. The anti-birth mentality is the biological expression of the cultural and moral suicide of the West.

The results of the European Elections rewarded the political parties that most openly invoke national identities. Of particular importance is the sweeping victory of Matteo Salvini’s Lega, which attained 34.3% of the votes in Italy. But Italy, however, has been the country where the push for immigration has been the strongest, with not only the Episcopal Conference entering the field, but even Pope Francis who has been presenting himself as the leader of the leftwing political spectrum. The front-cover of the weekly L’Espresso, May 26th, portrays Pope Francis with the mask of Zorro, the vigilante, and defines him as the voice of “the people’s protest” against Salvini. On May 27th,in his Message for the World Day of Migrants and Refugees”, Pope Francis affirmed that “the motto of the true Christian is ‘the last’ first’, reiterating: “ this is not only about migrants: it is about putting the ‘last’ first”. That same morning, the Pope met with the Chief of the Kayapo Indios of the Amazon, Raoni Metukire, to re-launch revolutionary indigenism, in view of the Synod on the Amazon in October.

The Bergoglian theology of the “last” represents open encouragement for the “replacement migration” strategy. It is not clear who ‘the last’ are, but it is clear who those that must be replaced are, in the new “preferential option.” The Gospel exhorts us to love our neighbor as ourselves: “there is no greater commandment than this” (Mark 12, 29-31). St Thomas Aquinas in his Summa Theologica (question 26, part II-II), explains however, that love for our neighbor is not a generic and indiscriminate sentiment, but has a precise gradation, which he calls the ‘order of charity’, whereby love must progressively extend itself from those closest to those farthest away. God must be loved more than our neighbor (a.2) and more than ourselves (a.3). Man must love himself more than his neighbor (a.4) and among our neighbors, some are to be loved more than others (a.6). The closest to us are those who gave us life and those we gave it to: our parents and our children. It is from them that love for our neighbor begins.

It would make no sense, for example, to throw our parents out in the street in order to bring a couple of immigrants into their room. Further, the love that we owe our neighbor is primarily of a spiritual nature. What we must desire more than anything else, is the salvation of those we love. And loving means desiring their salvation. In the case of immigrants this consists in desiring their conversion to the true faith. But today there is no pastoral care of evangelization for immigrants underway, in Italy or in Europe. Multiculturalism is presented as a much higher value than the monocultural Christian identity.

The dogma of hospitality is being proclaimed furthermore, by a society that takes the life of innocent human beings, unborn babies and old people; the former condemned to death by abortion, the latter, by euthanasia, without any real opposition to these crimes by the men of the Church. In reality, those who are scandalized by the display of a crucifix in schools or by a rosary kissed by a political leader, not only want to extirpate every public expression of Christianity, but also expect to snuff out the light of the divine and natural law still existent in our consciences, compelling us to defend innocent human life. And those who still have a Christian conscience, cannot but reclaim the vivid presence of the Crucifix, not only in private life, but also in public life and in the collective identity of European nations.

Hence, we call upon the political parties in Italy, Hungary, France and many other countries that won the elections, thereby defeating “immigrationism”, not to limit themselves to a generic or superficial call to Christian roots, but to express this identity concretely in the institutions and laws of Europe, starting with the uncompromising defense of life and the family. The “Lambert case”, after that of Eluana Englaro and Alfie Evans, is the example of a battle that must be conducted in the upcoming months. This will perhaps raise the level of the conflict, but today we are battling for the life or death of our civilization. This battle, prior to being in parliament, is to be conducted in [our] culture and mentality. Yet, the electoral results have the function of revealing the deep tendencies of public opinion and in the case of May 26th, the electoral test demonstrates a European population that is not about to capitulate.