Professor Roberto de Mattei explains the crisis in the Church 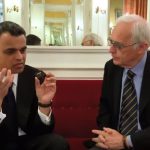 On this edition of the John-Henry Westen show we are pleased to bring you this first in a two-part interview with Professor Roberto de Mattei. Described as the greatest historian on the Catholic Church alive today, Professor de Mattei explains how the crisis in the Church came about and how Pope Francis has contributed to it. “Pope Francis, even more than modern liberal theologians, is a revolutionary because while they theorize he puts into practice the revolution itself.” END_OF_DOCUMENT_TOKEN_TO_BE_REPLACED