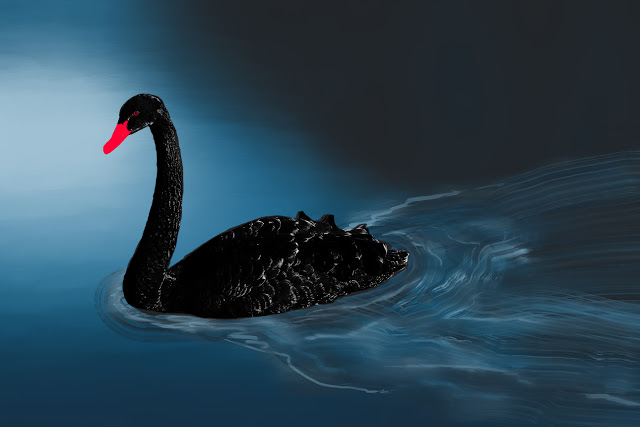 The Black Swan (Cygnus atratus) is a rare bird, of Australian origin, which takes its name from the colour of its plumage. Nassim Nicholas Taleb, a financial analyst and former Wall Street trader, in his book, The Black Swan: The Impact of the Highly Improbable, (Random House, New York, 2007) chose this metaphor to explain the existence of unexpected, catastrophic events that could turn collective life upside down.

The Corona Virus has been the “black swan” of 2020, writes Marta Dassù, of the Aspen Institute, explaining that the epidemic is putting the economic activity of Western nations in crisis and “demonstrates the fragility of the global manufacturing chains; when a shock hits one of its rings, the impact becomes systemic” (Aspenia, 88 (2020), p.9). “The second pandemic is on its way – writes Federico Rampini in La Repubblica of March 22 – which also needs to be dealt with and cured. It is called the ‘Great Depression’ and will have a balance of victims parallel to that of the virus. In America nobody uses the term ‘recession’ anymore because it is too bland.”

The world’s interconnected economy is proving itself to be a precarious system, but the impact of the Corona Virus is not only economical and sanitary, it is also religious and ideological. The Utopia of Globalization, which until September 2019, seemed to prevail, is [now] undergoing an irremediable debacle. On September 12, 2019, Pope Francis had invited the leaders of the major religions, and the international exponents of the economic, political and cultural world, to participate in a solemn event which was to take place in the Vatican on May 14, 2020: the Global Compact on Education. Around the same time “the prophetess” of deep ecology, Greta Thunberg, arrived in New York for the U.N. Climate Change Summit 2019, and Pope Francis on the eve of the Amazon Synod, sent a video- message to her and the participants at the summit, manifesting his full consonance with the globalist aims.

On January 20, 2020, the Pope addressed a message to Klaus Schwab, Executive President of the World Economic Forum (WEF), of Davos, underlining the importance of an “integral ecology”, which takes into account “the complexity of the interconnection of our common home”. But by then a mysterious virus had already begun to inflict a deadly blow on “the global village”.

A few months later, we find ourselves faced with an absolutely unprecedented situation. Greta is forgotten, the Amazon Synod a failure, the world’s political leaders reveal their incapacity in dealing with the emergency, the Global Compact is off and St. Peter’s Square, spiritual centre of the world, is empty. The ecclesiastical authorities conform to (sometimes anticipating) the restrictive decrees from the civil authorities who forbid Masses and religious ceremonies of any kind. The most symbolic and paradoxical event is perhaps the closing of the Sanctuary in Lourdes, par excellence place of physical and spiritual healing, that barred its doors, for fear that someone might get ill there, praying to God for his health. Is it all a maneuver? Do we find ourselves faced with a totalitarian power that is restricting the freedom of citizens and is persecuting Christians?

It is strange, however, this persecution seemingly without any heroic form of resistance, unto martyrdom of the persecuted; so unlike anything that has happened throughout all the great persecutions in history. In reality, it is not anti-Christian persecutions that we should speak of, but of “auto-persecution” among Churchmen, who, by closing the churches and suspending Masses, seem to be bringing to its ultimate coherence a process of auto-demolition begun in the 1960s with the Second Vatican Council. And unfortunately, individual exceptions apart, even the traditionalist clergy, who are closed up in their houses, appear victim to this auto-persecution.

It is heartwarming the outburst of generosity shown by 8000 doctors in Italy, in response to the appeal of the government for 300 volunteers in the Lombardy hospitals. How edifying an appeal to priests from the President of the Italian Episcopal Conference would have been, never to deprive the faithful of the Sacraments in churches, homes and hospitals! Many invite people to pray, but who remembers the prospect of being at the beginning of a great chastisement? Yet this is the prediction of Fatima, whose hundredth anniversary in 2017 was commemorated by many. On March 25th, Cardinal António Augusto dos Santos Marto, Bishop of Leiria-Fátima, renewed the ceremony of Consecration to the Immaculate Heart of Mary for the entire Iberian Peninsula. It is certainly a meritorious act, but Our Lady asked for something more: the specific consecration of Russia, done by the Pope, in union with all the bishops of the world. It is this act, until now never done, that everyone is waiting for, before it is too late.

At Fatima Our Lady announced that if the world will not convert, various nations will be annihilated. Which nations will these be? And in which way will they be annihilated? What is certain is that the principal chastisement is not the destruction of bodies, but the darkening of souls. In Sacred Scripture, we read “that by what things a man sinneth, by the same also he is tormented” (Wisdom 11,16). The same thought, from the mouth of pagan Seneca, reminds us that “the chastisement of the crime is in the crime itself.” (Della fortuna , part II, chapt. 3).

The punishment begins when the idea of a just and remunerative God is lost, by entrusting oneself to a false image of God, Who, as Pope Francis said, “doesn’t permit tragedies to punish sins.” (Angelus, February 28th 2020). “How often do we think that God is good if we are good and that He punishes us if we are bad. It is not so,” reiterated Francis at the Christmas Mass last December 25th. Yet even John XXIII, ‘the good pope’, recalled that “the man, who sows sin, reaps chastisement. The chastisement of God is His response to the sins of men; thus “He (Jesus) tells you to run from sin, principal cause of the great chastisements”(Radio Message December 28, 1958).

Removing the idea of chastisement does not mean avoiding it. Chastisement is the consequence of sin and only contrition and repentance of one’s sins may prevent the punishment that these sins inevitably bring, for having violated the order of the universe. When sins are collective, chastisements are collective. Why wonder at the deaths brought on a nation, when governments are guilty of homicidal laws like abortion, and during the epidemic the slaughter continues to have a preferential way? As we see n Great Britain, where the government has even authorized “abortion” at home, so as not to interrupt the carnage during the Corona Virus! And when, instead of bodies, souls are hit, why be surprised that the loss of faith is the chastisement for those responsible? The refusal to see the hand of God behind the great catastrophes of history is a symptom of this lack of faith.

The collective chastisement arrives swiftly, like a “black swan” appearing suddenly on the waters. This vision baffles us and we don’t know how to explain where it comes from and what it heralds. Man is incapable of predicting “black swans” which from one day to the next turn his life upside down. But these events are not a fruit of chance, as Mr. Taleb retains and all those analyzing the events from a secularist and human perspective, forgetting that chance doesn’t exist and that the maneuvers of men are always subject to the will of God. Everything depends on God and God goes all the way to the end when He begins his work. “For he is alone, and no man can turn away his thought: and whatsoever his soul hath desired, that hath he done” (Job, 23,13).